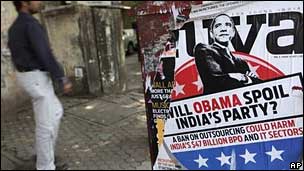 Don't expect fireworks. That's the message being sent out on the eve of President's Obama's visit to India which, incidentally, coincides with Diwali, the noisy festival of lights and pyrotechnics.

India's Foreign Secretary Nirupama Rao says nobody should expect "big bang outcomes" from the visit. Talking about game changers, nothing can quite beat the civil nuclear co-operation deal which President Obama's predecessor, George W Bush, sewed up with PM Manmohan Singh in 2008. It's a tough act to follow for President Obama.

But that doesn't mean the end of headline-grabbing engagement between the two countries. As strategic affairs analyst C Rajamohan says: "Even though the US and India don't have any new big ideas, big ideas are going to thrust themselves upon the US-India relationship."

So the visit may not turn out to be a damp squib as some have predicted.

For one, President Obama's trip - the fifth US presidential visit to India since Independence and the third in the past decade - means different things to different people.

Most analysts believe that much of it is about the economy. President Obama wants India to help create jobs back home, where the economy is wheezing and the unemployment rate is hovering in double digits.

Gunjan Bagla, a mechanical engineer from India who now advises American companies curious about investing in India, says the trip is about mining the "new Wild West", as he describes India's voracious appetite for goods and services despite its chaotic systems. "It is the lure of the market that is enticing American companies," Mr Bagla told me this week. "The time is ripe for the US to export more into India." Mr Obama plans to double US exports in five years and India is one of the world's largest markets. No wonder some 250 businessmen are travelling with him to India.

Will President Obama manage to stitch up a defence deal? American companies are bidding for a lucrative contract to sell 126 fighter planes to India. And then there's the widely reported $45bn that India plans to spend on military hardware. American companies must also be sniffing for opportunities there. Boeing, according to reports, is primed to sell C-17 military transport aircraft to India in what would be the largest US defence deal to date with India.

Bilateral trade is expected to reach $50bn by March next year - and is more or less in balance. India is America's 14th largest trading partner, up from 25th in 2003. American exports to India have doubled between 2005 and 2009. Trade in services has leapt to $22bn, a sevenfold increase in the past 10 years.

But major roadblocks remain in the way of fuller trade with a country where, rosy opinion polls say, Americans are loved more than in many other places in the world. (The fabled American Dream may have weakened for many folks in the US, but for the more than 100,000 Indians studying there, it is still a powerful magnet.) Key lucrative sectors like insurance and retail, for example, have been slow in opening up.

Will President Obama push India to open up insurance, retail and banking further? India has been making noises about leaning favourably on multi-brand retail and its potential to create jobs despite stiff opposition from the communists and sections of the governing Congress party who fear the eclipse of India's millions of mom-and-pop friendly neighbourhood stores. 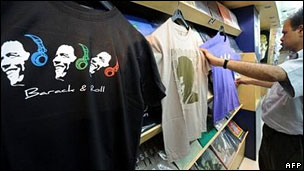 According to one back-of-the-envelope estimate by the US-India Business Council, $10bn in bilateral deals during the president's visit could save or create up to 100,000 US jobs. That's a decent number of jobs, and would give the president something to crow about after this week's setback in the mid-term elections.

To others, President Obama's visit is more about an increased strategic partnership with India.

Will he make a major push to support India's hopes of becoming a permanent member of the UN Security Council? Unlikely, say most analysts.

Will he facilitate easier access to US technology? Indian media is awash with reports that the president is likely to lift some of the sanctions on technology, mostly concerning equipment with both civilian and military uses. If this happens, it would possibly be the closest thing to a "big bang" announcement.

Will the president make a commitment to a deeper engagement in India about fighting terrorism? India's interior secretary recently expressed his chagrin over the US not sharing enough information about David Headley, who is on trial for helping plan the Mumbai (Bombay) attacks in 2008. The president has already spoken about a review of intelligence sharing; it couldn't have come at a better time.

What about what many perceive as growing differences over security in the dangerously troubled South Asia region? India insists Pakistan is the problem. Washington says Pakistan is an integral part of the solution. In his sensational new book Obama's Wars, Bob Woodward quotes President Obama telling a meeting of aides: "We need to move aggressively on India-Pakistan issues in order to try to reduce tensions between the two countries." If this is true, India would want more clarity from the president - any mention of Kashmir, as the president surely knows, is sure to raise the hackles of India. There may be no fireworks in the offing, but who said President Obama's visit is any less interesting?