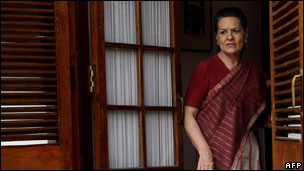 India's Grand Old Party can barely seem to breathe without the Gandhi dynasty at its helm. So, in a predictable ritual, Sonia Gandhi has been elected as the Congress party president for the fourth time in a row - unopposed. It is a bit of a meaningless rite because Ms Gandhi has been the unchallenged heir to the Nehru-Gandhi legacy for many years now.

For a woman who once loathed politics viscerally - she had famously recalled how she begged her huband, Rajiv Gandhi, not to become the prime minister after the assassination of his mother and former PM Indira Gandhi - Sonia Gandhi has come a long way. She is today seen as an astute politician, with liberal, pro-poor views. And her stature was enhanced after her famous refusal of the premiership following her party's win in the 2004 general elections. It's also been an incredible journey for a daughter of a well-to-do builder from Turin who - according to biographer Katherine Frank - had been a supporter of Mussolini during the war. By her own admission, she knew nothing about India before she met her husband in Cambridge, where both were foreign students, except it "existed somewhere in the world with its snakes, elephants, and jungles, but exactly where it was and what was it really all about, I was not sure."

Ms Gandhi's re-election comes at a time when the government led by her party - now in it's second term - appears to be worryingly adrift. Kashmir is again spinning out of control with an indigenous popular uprising against India, Maoist violence is on the rise in vast swathes of the country, and the movement for a separate Telangana state is still boiling. The government earned the rebuke of the Supreme Court recently for allowing food grains to rot in storage. (Why does it keep purchasing more food from farmers than it can store and distribute to the poor?) Delhi's Commonwealth Games fiasco has done little good to the government's image. Runaway and brazen corruption is threatening to stymie India's progress, but Ms Gandhi's party and government do not appear to be bothered too much.

There is also a growing impression that the government and the party are not on the same page. Ministers and Congress party leaders openly differ on policies and snipe at each other - there is a sharp divergence of views on how to tackle Maoism, separatism and even building key infrastructure. 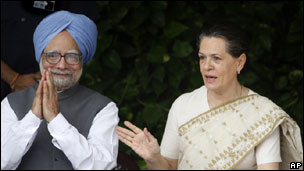 The much-hyped diarchy - Ms Gandhi's prime ministerial apointee Manmohan Singh runs the government, and she runs the party - doesn't appear to be delivering the goods. Mr Singh is seen as a hardworking, dour economist-technocract, while Mrs Gandhi is seen as a somewhat distant, slightly enigmatic figure, who does not spell out her vision on most issues. The problem is neither seem to be interested in taking the initiative.

Mr Singh, who has never won an election in his life and is an indifferent orator, has little political legitimacy. Ms Gandhi, who has political standing, maintains a studied silence on most issues. "The scandal of Indian politics is not simply that the prime minister is politically weak; it is that those who are politically strong are constantly running away from political responsibility," says commentator Pratap Bhanu Mehta.

"Sonia Gandhi has authority," says Mr Mehta. "But it has to be said that this is an authority studiously cultivated by distance and by avoiding issues that truly matter; its sole concern seems to be that no shadow is cast on her power. But this is not political capital that is ever used for resolved tricky national issues." The estrangement of politics and policy has never been so stark.

Many feel it is time for Ms Gandhi to step out, assert her authority and take responsibility. Right now, the buck does not appear to stop with anybody in the government or the party.