Did you see a tiger? 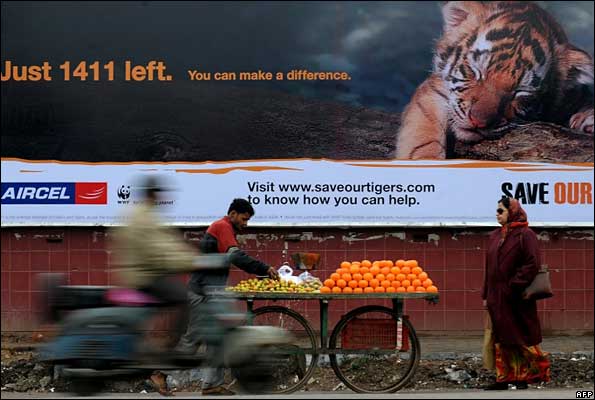 Did you see a tiger?

At Corbett National Park, home to some 160 of India's fast-depleting population of tigers, nearly everybody you meet asks you this question - BlackBerry-fiddling fellow tourists, bored-looking guides, drivers, souvenir shop owners, the trauma care attendant-turned-masseur who rubs me down at the resort spa, the mahout taking children for a joyride on his elephant, the guard who sits forlornly with a torch and a stick to shoo away anglers who come to prey on the exquisite golden mahseer gliding in the waters of the Kosi river.

When I tell them I just missed seeing one, they smile ruefully, because most of them haven't seen the tiger either. Most of my friends who go on regular tiger spotting "missions" usually return disappointed. They commiserate with me when I tell them that I saw exactly one tiger pug mark, lots of elephant turd, one old hoary tusker in a cluster of trees, lots of handsome deer and frisky monkeys, some boar and many other not-so-interesting animals. I tell them I waited for a long time after hearing the deer braying deep inside the jungle - I had read somewhere that it's usually an alarm call sparked by a tiger lurking around. The deer brayed on, the sky turned orange with a fast setting sun. I moved on with my elusive and what promises to be eternal tiger hunt.

As I drove up outside the park, a group of breathless people descended on our jeep.

"He was here, he was here, just striding across the grassland," a gnarled old man shouted.

Who was where? I inquired, rather foolishly.

"Tiger, tiger! You missed it by a minute!"

Upon hearing this, a jeep load of anxious tiger enthusiasts behind me turned their vehicle and sped off into the forests again. I let the tiger prowl in peace. It's all about getting the tiger out of your system, I assured myself.

When Jim Corbett, the legendary hunter who lived in these parts and after whom the park is named, was alive, tigers may not have been so elusive. Going by his hair-raising tales of hungry man-eaters - one of them had apparently devoured more than 400 people before it fell victim to Corbett's gun - there were plenty of the cats roaming in the forests then.

Corbett died in 1955. Nearly four decades on, India had more than 4,000 tigers. By the turn of this decade, their numbers had dropped to a little over 3,500. Today, the government reckons, their numbers have drastically dwindled to 1,411. The numbers, by the government's latest admission, "indicate a poor status of tiger population outside the tiger reserves and protected areas" in the 17 states where the tiger is found. 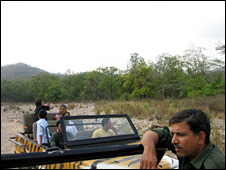 The government says that the tiger population "by and large" in the 39 tiger reserves and protected areas in these states is "viable", possibly meaning it is reasonably healthy. Millions of dollars have been poured into conservation efforts in these tiger havens. But only half of the 80 locations where the tiger is found in India are protected. A little over a third of the tigers actually live in unprotected areas where, experts say, they are at the mercy of poachers and victims of habitat destruction and prey depletion. These are not happy tidings for the world's largest population of the magnificent beast.

There's more bad news. All is not well with even the pampered tiger reserves. A recent government assessment found that 16 of the 39 reserves were faring poorly, while 12 were doing well. Nine others were plodding along satisfactorily.

Poaching, of course, remains a big problem. A recent investigation found that tribal hunters receive orders for 60 tigers a year. These tigers are trapped, killed, skinned and body parts collected and preserved. Poachers often work in collusion with corrupt forest guards. The cat has been wiped out from two reserves already.

Habitat destruction is another threat. Environmentalists say local forest communities should be empowered to play a greater role in guarding and preserving forests and wildlife. Sceptics argue that they end up earning much more by killing tigers than saving forests.

India says part of the problem is China, which is allegedly the biggest market for tiger parts. Unless China cracks down and the demand for tiger parts goes down, the poaching will continue, experts say.

There are worries about the rising tide of people like me who descend in hordes on the reserves for their tiger fix. Some 70,000 people visit Corbett alone every year. Tourist lodges have sprouted all around the forest - many of them owned by politicians. Amid a flurry of recent reports that the government was planning to ban tiger tourism, federal forest minister Jairam Ramesh admitted that tourism in the 39 reserves, "particularly in the core areas, will be strictly regulated."

There are new, daunting challenges - many of the tiger reserves are in areas which are Maoist strongholds, and nobody quite knows whether a bloody man-animal conflict is brewing in these parts. The government says "special crack teams" are being sent to these parts, but nobody quite knows how they are going to end up fighting the well-armed rebels who are already challenging the might of the Indian state.

So is India losing its fight to save the tiger? Going by their plummeting population, it appears so. There isn't enough political will to save the tiger: a well-funded federal authority to conserve tigers has been in existence since 1973, but it has clearly not risen to the challenge. The fact that poaching and forest fire figures haven't been updated since 1998 on its website hints at a lack of seriousness.

So, did you see a tiger? At this rate, anyway, the chances are getting bleaker by the day.