Mumbai verdict and the media bloodlust 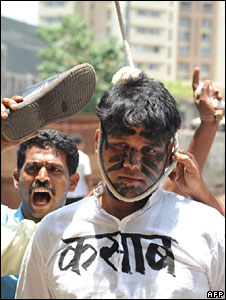 The death penalty for Mohammad Ajmal Amir Qasab, hopefully, brings to an end the media-driven bloodlust over how the only surviving gunman of the Mumbai attacks should be punished.

It all began with the networks saying that nothing less than a death sentence for Qasab would satisfy Indian people. To put things into perspective, more than 300 of India's 120,000 convicts face death sentences. The majority of these sentences, I believe, will be commuted to life at some stage. The last execution in India was held in 2004, the one before that in 1995. There is a rising tide of opinion against capital punishment, and there is another impediment: most states do not have hangmen to execute the sentences.

But if you watch the networks and listen to FM stations, an exception must be made of Qasab and he must be hanged quickly. There was abundant rough justice on offer. A radio jockey gleefully announced that Qasab should be tied to one of Delhi's notorious private buses and dragged around till he died. Another said his limbs should be chopped off. One viewer called in a network saying that Qasab should be hanged from a tree and stoned to death. Mock hangings were staged in cities. "Qasab is not just a terrorist," purred a TV reporter from the scrum outside the court this morning, "he is a serious terrorist and deserves serious treatment."

There is undoubtedly a reservoir of such populist opinion in many countries, particularly those with the death penalty. The question here is about how a responsible media should reflect and report all the views around the issue and steward the discussion.

But this provocative stance must mark a low point in news network coverage in India - critics believe they have played an exploitative, inflammatory role, feeding on and fanning jingoism simply to boost ratings. 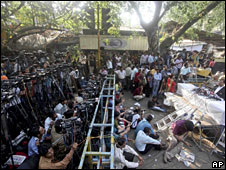 Across the border, the Dawn newspaper wrote that the Indian state "whips into line a weak-kneed media with populist slogans of pseudo-nationalist expediency."

Baying for Qasab's blood also neatly dovetails into the unabashed anti-Pakistan jingoism which some networks revel in. Do such networks shape and alter public opinion? Most people I speak to feel that networks have an exaggerated sense of importance. One editor recently said that TV channels may sway public sentiments temporarily, but were incapable of changing public opinion. So when they stage media inquisitions like in the case of Qasab, they do grave injustice to the vast mass of sane and considered public opinion, which they wilfully ignore. It makes India look like a nation of intolerant bigots.