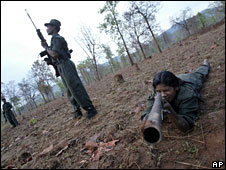 It is India's most bloody, intractable and shadowy war in recent history.

Today 223 districts - India has 636 districts - in 20 states are "Maoist affected", up from 55 districts in nine states six years ago. Ninety of the affected districts, according to the government, are experiencing "consistent violence". PM Manmohan Singh calls it the country's "greatest internal security challenge".

As Maoist activity has expanded over a vast swathe of mineral-rich jungles and countryside where most of India's tribespeople - its poorest of the poor - live, the cost of the conflict has been huge.

As the toll rises, the conflict provokes a sharply polarised debate.

On the one side are the city-bred romantic revolutionaries. One perceptive analyst calls them a "Maoist-aligned intelligentsia vicariously playing out their revolutionary fantasies through the lives of the adivasis [tribespeople], while the people dying in battle are almost all adivasis". They protest against the government's plans to smoke out the rebels.

On the other, are supporters of strong state action who believe the security forces should annihilate the rebels and wrest back areas under their control. Collateral damage, they believe, is par for the course.

So India's Maoist rebels, in the words of another commentator, are either "romanticised, eulogised [or] demonised". It depends on which side you are on.

It is time to ask some basic questions.

What do the Maoists want?

They want to establish a "communist society" by overthrowing the country's "semi-colonial, semi-feudal" form of rule through an armed struggle. The say they are fighting for the rights of the neglected tribespeople, an unquestionably laudable goal in a vastly iniquitous land.

So are they revolutionary Marxists? Are they anarchists? Or are they India's equivalent of historian Eric Hobsbawm's "social bandits", peasant Robin Hood outlaws? It is difficult to say.

Who is suffering the most in the seemingly unending war?

The same tribespeople for whom the Maoists say they have picked up the cudgels.

The rebels end up killing poorly paid, poorly armed policemen, small businessmen and low level political workers. Analysts find it odd that their "class enemies" do not include big businessmen and companies, presumably because many of them cough up protection money.

What has been the track record of India's Maoists?

Not very inspiring, say most commentators, apart from a few exceptions of getting a fairer deal for the poor by intimidating the state. 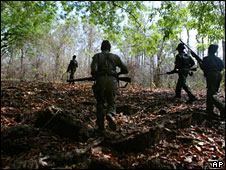 They point out that the Maoists never questioned the partition of India. In 1971, during the war with Pakistan, they supported the Pakistani president Yahya Khan and even advised revolutionaries in East Pakistan - now Bangladesh - to defend Pakistan. Analysts say the rebels were taking their cues from China.

Another criticism is that the rebels have never really tackled or taken on the rising tide of communalism that swept the country in the 1980s and 1990s. They have shown little interest in taking a stand against Hindu or Muslim fundamentalism.

Are the rebels the only ones fighting for India's poor?

No way. There are hundreds of civil society movements working tirelessly - Medha Patkar's movement against people displaced by dam projects is a stand-out example.

But the rebels succeed in grabbing attention, many believe, because they practice violence.

"Violence [has] the potential to make news and attract attention... satyagrahas [passive resistance], non-violent actions and human chains have been made completely ineffective and delegitimised by the state and the media," says political scientist Aditya Nigam.

So what do the Maoists end up doing?

Operating in a binary world of "either you are with us or against us" - eerily reminiscent of a recent "war on terror" - the rebels, many analysts say, have taken an awkward, simplistic position on how people behave and society operates.

"We are not yet in a completely Orwellian universe. Some things are neither Hindu nor Muslim, neither proletarian nor bourgeois. There is no war to end all wars, no ultimate death penalty that will put an end to all death penalties," says independent scholar Dilip Simeon.

"Hindu Rashtra [Hindu polity] is not the final solution to the so-called 'minority problem', nor is the 'people's war' the final answer to class exploitation."

In the absence of such understanding, the bloody war grinds on, reaping its grim harvest.
Do the deaths of tribespeople, policemen, rebels, traders and political workers have any meaning? Does the displacement of tens of thousands of people suspected to be sympathising with the rebels make any sense? Or are some right to view these as wasteful deaths and futile displacements?

It is the Maoists' apparent indifference to life that worries Dilip Simeon. "The indifference," he says, "is the mark of nihilism that has overtaken the revolutionary spirit." That is why Maoism in India, many believe, will remain a doomed revolution.