God's Own Country is in fine fettle. As I travel north from Kerala's brooding capital, Trivandrum, into more salubrious Malabar country my spirits lift. I drive past rustling coconut palms, simple homes, derelict madrassas and Communist party and Muslim League flags fluttering in the breeze. Women in designer burqas emerge from the mist. My car wheezes up the steep hill past the red and yellow passenger buses which merrily rattle down in the opposite direction. An empty bus topples into a deep gorge minutes after I negotiate the road, and both the driver and his assistant survive. All is well.

Then, in the dappled light, I see her standing there.

A mud haven - India's only "earth" resort and possibly the largest of its kind in Asia - nestling in 35 acres of greenery stacked with pepper, coffee and tea plantations and ponds. The 20,000 sq ft two-storey structure in the Banasura hills is made entirely out of mud with bamboo and coconut palm leaf roofs: a paean to Mother Earth.

The 31-room resort is the result of talent and ingenuity. It is owned by a Virginia-based software engineer from Kerala, whose company straddles two continents. Shankar Thiruvillakat initially thought of setting the place up as a getaway for his employees. But fired by the imagination of Eugene Pandala, one of India's best known architects who works with traditional building technologies and is an enthusiast for mud buildings, it became an audacious architectural marvel.

Mr Pandala got his workers to scoop up mud from the site and used it to build the structure. Earth is immensely malleable, the softly-spoken, award-winning architect tells me. It can be moulded, shaped and pressed when wet. It hardens when exposed to sun, making it a durable building material. In this case, Mr Pandala used a mere 5% cement as an additive. 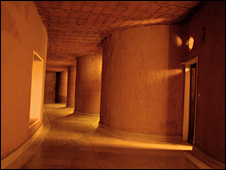 When most of India's architects are designing energy-guzzling glass and chrome buildings that are supposed to mark the arrival of a new India, Mr Pandala offers a different vision - the Wayanad earth resort is elegant and utterly modern. Tourists have begun trooping in already.

"There are traditional mud buildings in India which date back to 100 years.They are still standing strong. We lost our "mud consciousness" in the last half century. It is time to revive it," says Mr Pandala, taking me around the place. He is doing his bit, building mud monuments and buildings and green projects for tsunami survivors. But the resort in Wayanad is a crowning achievement.

I come away with the feeling that if we only had more architects like Mr Pandala and sensitive entrepreneurs like Mr Shankar, India's architectural look could be so different. Mr Pandala's creation is a glorious return to tradition, deftly adapted to modern-day needs.

The thought hits me as I leave the departure hall of the airport in Kochi to catch my flight to Delhi. I get up from a hideous looking chair, and walk past a miserable aphrodisiac advert to step out into the tarmac. Wayanad's mud haven already seems like a dream.