Why are Indian students being attacked in Australia? 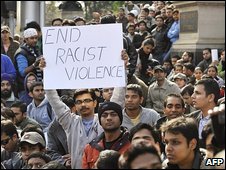 What is happening to Indian students in Australia? Why have they been mugged, knifed, set alight, and murdered, mostly, in Melbourne, Australia's proud multi-racial melting pot city where, according to my colleague Nick Bryant, people from 140 nations live side-by-side?

Nearly a year after the attacks began, nobody is quite sure. Already, in the new year, two Indians have been attacked - one murdered; and the other allegedly set on fire in Melbourne. What we know for sure is that the number of Indian students wanting to study in Australia has slumped by almost 50%, diplomatic relations between the two countries have soured and grim travel advisories have been issued by the Indian government to students in Australia.

People here say they still don't know why Indians are being targeted. Have the attacks followed a pattern? Do the victims have some kind of a common profile or background? How do the number of attacks on Indians compare with attacks on other expatriate groups? Are the attacks concentrated in a specific area? How many of these attacks could have had a racist motive?

Australian police have said the attacks appear to be random with no evidence they were racially motivated.

In the absence of any clarity - I have not read a single major investigation into these attacks in the Australian media, or the outcome of any official probe - the shrill sections of the Indian media, especially TV news networks, have gone ballistic.

Every other night, we have news presenters telling us over on-screen captions like 'Indian Burnt In Australia' that Australia is a racist country, and that Melbourne is the most racist city of all. An Indian newspaper cartoon even portrayed the Australian police as the Ku Klux Klan.

Nobody contests the fact that Indians have the right to feel worried, very worried, about the spate of attacks. More than 70,000 Indians are studying in Australia; nearly a fifth of the international enrolments are from the subcontinent. There have been reports that a number of the victims have enrolled in vocational courses, and live in poorer neighbourhoods to save money.

Australia has reason to worry about the attacks too. Education is the country's biggest export - after coal and iron ore - and international students contribute $13bn to the Australian economy every year. Australia, by one estimate, could easily lose $70m because of the attacks.

It's a no-brainer that Australian authorities need to investigate each of these attacks thoroughly to come to a considered and precise explanation as to why they happened and quell the growing mistrust between the two countries. 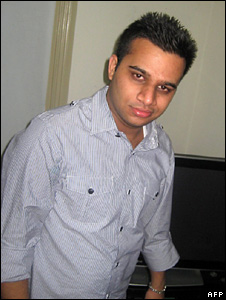 Many Indians I have spoken to find the discourse in the Australian media on the spate of attacks superficial. Tim Colebatch, an editor at Melbourne Age, writes that such incidents happen "because human beings are imperfect creatures. They can be selfish, they can be hateful, they can enjoying hurting, even killing, other humans. It happens here, it happens in India, it happens everywhere."

Mr Colebatch then tries to offer some clues to why Indians may have been attacked. One of the victims, Nitin Garg, was taking a short cut through a park when he was murdered, while Australians "instinctively know that their parks are not safe at night, and avoid using them as short cuts". And so, he writes, Mr Garg has "become another victim of our epidemic of alcohol abuse, our tolerance of extreme violence in films and screen games - and yes, of the Romper Stomper racism that seems to live on among teenagers in the western suburbs, now directed against Indians instead of Vietnamese."

Alcohol abuse and exposure to violent films can hardly be a problem with Australian youth alone. And fringe racism exists in many countries in the world. Mr Colebatch's interesting observations notwithstanding, Indians feel that they are in the dark about the spate of attacks.