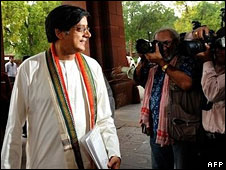 To tweet or not to tweet is the question that Mr Shashi Tharoor must be asking himself these days.

India's junior foreign minister is a former UN diplomat, a prolific writer, a political debutant and an inveterate Twitter-er. Some are already calling him, rather uncharitably, India's 'Twittering Minister', and skewering him for "wasting time" with his "frivolities" on the social networking site. His supporters - and there are over 160,000 people following him on Twitter - say that Mr Tharoor is not your average staid, fuddy-duddy Indian politician; and his thriving online social networking skills make him refreshingly different.

His political colleagues may not agree. It all began when Mr Tharoor got ticked off by the government for staying in a luxury hotel in Delhi as his official bungalow was not ready to move in. He promptly moved out and Twittered about how it didn't make much sense to him because he was paying for his hotel room, not the taxpayer. It was bad timing. The Congress government says it is on a major austerity drive in these pressing times, though many feel that it is mere tokenism - ministers may travel economy class and Rahul Gandhi may travel by train but they invariably do so with a retinue of sullen faced security men and fawning officials, which ends up inconveniencing other passengers.

Matters came to a head earlier this week, when Mr Tharoor, provoked by a follower on whether he would travel "cattle class" on his next trip to his constituency in Kerala, Twittered back: "Absolutely, in cattle class out of solidarity with all our holy cows!" He earned an immediate reprimand from his Congress party. "The party strong disapproves the statement of the minister," a spokeswoman said. "It is unacceptable, not respecting political or any other sensibilities." Delhi's chattering class debated whether the Twittering Minister was poking fun at economy class passengers by alluding to the "cattle class". And whether he was raising the hackles of the stuffy political class by calling them "holy cows".

Twittering back, Mr Tharoor has negotiated the "cattle class" slight uncomfortably, arguing that it was a "silly expression" not meant to disrespect economy travellers. Instead, he says, it was airline companies who "herded passengers in like cattle".

He also came up with a somewhat revisionist and semantic take on the phrase "holy cow". "Holy cows are NOT individuals but sacrosanct issues or principles that no one dares challenge. I wish the critic would look it up," he writes. "Now I realise that I shouldn't assume people will appreciate humour and I shouldn't give those who would wilfully distort your words an opportunity to do so."

As far as my limited knowledge goes, "holy cow" is mostly used as an exclamation, in American slang. In my part of the world, people use the phrase loosely as a mild pejorative.

It is time for scholars to now join the merry fray and decode Mr Tharoor's use of the phrase. And political pundits to find out whether the 'Twittering Minister' was taking a dig at the starchy party bosses while saying that humour doesn't always find many takers. Come to think of it, why not deploy a team of psychologists to ascertain if Mr Tharoor was being supercilious in wondering whether Indians, by and large, are a humourless people.

Should a member of the cabinet be using popular social networking tools to network with people? The jury is still out on this, but when I scan Mr Tharoor's tweets I find most of them to be harmless, constipated takes on cricket, traffic jams in Delhi, Patrick Swayze, Roger Federer and so on. They are unexceptional, unexciting and largely irrelevant - like most of stuff on social networking sites. He's also a frenetic Twitter-er: on Friday, a working day, he sent out 10 tweets in less than three hours.

No one should take away Mr Tharoor - or anybody's - right to use this social networking device to voice his or her opinions. But does Shashi Tharoor trivialise his office and work with his manic tweeting? Should he slow down and write his words more carefully before sending them out all over the world? Or should he tweet on regardless? What do YOU think?

PS: Mr Tharoor may have earned a bit of reprieve after his party admonished him and one of its leaders sought his resignation over his "cattle class" tweet. This evening, Prime Minister Manmohan Singh said his junior minister's remark "was a joke." I suspect most party members don't share Mr Singh's view.