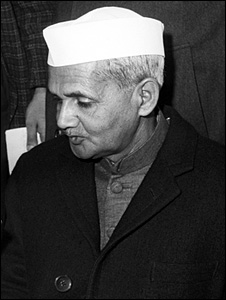 Was India's third prime minister, Lal Bahadur Shastri, murdered? Officially, the diminutive leader died of a heart attack in a dacha in Tashkent, hours after he signed a peace agreement with the Pakistani president, Ayub Khan, on 11 January 1966, some four months after the end of the second war between the two neighbours. But if you believe surviving members of Mr Shastri's family and an enthusiastic Delhi-based journalist, Mr Shastri was possibly poisoned.

What has added grist to the conspiracy mill is the Indian government's refusal to declassify a document it has in its possession pertaining to Mr Shastri's death. In response to a right to information request by the enterprising Anuj Dhar, a journalist and a self-proclaimed "declassification enthusiast", the prime minister's office said that making public that document could "harm foreign relations, cause disruption in the country and cause breach of parliamentary privileges". Totally non-controversial in his life, Mr Shastri has become controversial in death.

I did a little digging around and found that most of the better-known accounts of Mr Shastri's death have raised no doubts - death by heart failure. In his magisterial India After Gandhi, historian Ramachandra Guha writes Mr Shastri "died in his sleep of a heart attack". In her biography of Indira Gandhi, Katherine Frank writes that after he "went to bed in the early hours of the 11th January, Mr Shastri had a fatal heart attack".

The most vivid account is in my dog eared copy of the long out-of-print book India, The Critical Years by veteran Indian journalist Kuldip Nayar. He was part of the prime minister's travelling press corps to Tashkent.

Mr Nayar writes that the Indian prime minister was already a heart patient, having suffered two attacks. He had had a hectic day, holding talks with the Russian premier, Alexey Kosygin - the Russians having brokered the pact - and his officials and had had very little sleep.

"That evening," writes Mr Nayar, "I met by chance his personal physican Dr RN Chugh, who accompanied him. I asked him how Shastri was standing the strain. He looked up to the sky and said: 'Everything is in the hands of God'." Mr Nayar does not elaborate.

Mr Nayar then proceeds to describe the fateful night in Agatha Christie-like detail. Since he was to travel in the prime minister's airplane early next morning to Kabul en route to Delhi, he retired to bed early an hour before midnight. "I must have been dozing when someone knocked at my door and said: 'Your prime minister is dying.' A Russian lady was waking up all the journalists," writes Mr Nayar.

A group of journalists then sped to Mr Shastri's dacha from the hotel. On arriving, Mr Nayar found a grief-stricken Mr Kosygin standing on the verandah. "He could not speak and only lifted his hands to indicate Shastri was no more."

When Mr Nayar went in, he found Dr Chugh being questioned by a group of Soviet doctors through an interpreter. In the next room Mr Shastri lay still on his bed. The journalists emptied the flower vases in the room and spread them on the prime minister's body. Mr Nayar also noticed an overturned thermos flask on a dressing table some 10 feet away from Mr Shastri's bed and wondered whether the prime minister had struggled to get to open it to get water. "His slippers were neatly placed near the bed; it meant that he walked barefoot up to the dressing table in the carpeted room," Mr Nayar writes.

Mr Nayar then pieces together the events leading up to Mr Shastri's death - of how the prime minister reached the dacha around 10 pm after a reception, chatted with his personal staff and asked his cook Ram Nath to bring him food "which was prepared in the dacha by the Russians". It gets more interesting from here. "In the kitchen there was a Soviet cook helped by two ladies - both from the Russian intelligence department - and they tasted everything, including water, before it was served to Mr Shastri," Mr Nayar writes. Remember this was at the height of the Cold War and India-Pakistan hostilities and the security paranoia was extreme.

As Mr Shastri tucked into a frugal spinach and potato curry meal, he received a call from a personal assistant in Delhi and sought the reaction to the Tashkent agreement back home. Then he spoke to his family in Delhi. He asked his eldest daughter, Kusum, about how she had found the peace pact. "She replied, 'we have not liked it'," writes Mr Nayar. "He asked 'what about her mother?' She too had not liked the declaration, was the reply given." A crestfallen Mr Shastri, according to Mr Nayar, then remarked: "If my own family has not liked it, what will the outsiders say?" 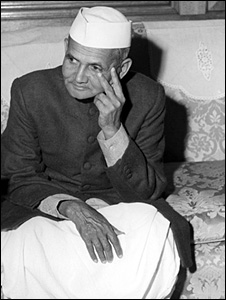 Mr Nayar writes that the prime minister's wife did not come on the line to talk despite many requests - a contention that is disputed by many of his surviving family members. This upset Mr Shastri. "He began pacing up and down the room... For one who had had two heart attacks earlier, the telephone conversation and the walking must have been a strain," he writes. Then his staff gave him milk and some water in the flask. Around 1.30 am, his personal assistant Sahai, according to Mr Nayar, saw Mr Shastri at his door, asking with difficulty, "Where is the doctor?"

The staff woke up Dr Chugh, while the prime minister's staff, assisted by Indian security men, helped Mr Shastri walk back to his room. "If it was a heart attack - myocardiac infarction, and obstruction of blood supply to the heart muscles, as the Soviet doctors said later - this walk," writes Mr Nayar, "must have been fatal."

Mr Nayar writes - presumably from an eyewitness account by the personal assistant - that Mr Shastri began coughing "rockingly", touched his chest and became unconscious. Dr Chugh arrived soon after, felt the prime minister's pulse, gave an injection into the heart, tried mouth-to-mouth resuscitation, but to no avail. More doctors arrived. They found Mr Shastri dead. The time of the death was 1.32 am.

Talk about foul play began as soon as the body arrived in Delhi. Mr Nayar says the prime minister's wife asked him why Mr Shastri's body had turned blue. He told her that when "bodies are embalmed" they turn blue. Mrs Shastri was not convinced. She asked about "certain cuts" on Mr Shastri's body. Mr Nayar told her he hadn't seen any. "Apparently, she and others in the family suspected foul play," Mr Nayar writes.

They still do. I went to meet Sidharth Nath Singh, the prime minister's grandson and a senior member of the main opposition Bharatiya Janata Party, recently to hear the family side of the story. He told me that Mr Nayar's account of the telephone conversation that Mr Shastri had with his family members that night was inaccurate, and that he HAD spoken to his wife. Mr Singh, who was two years old when his grandfather died, says that one person was detained on "suspicion of poisoning Mr Shastri", but was released. Mr Nayar's book has no mention of this.

"Knowing the truth is important for our family. The truth has never been out," Mr Singh told me. Then he talked about the cold war politics of the day, and who would have gained from poisoning Mr Shastri who had served as prime minister for only 19 months: a foreign power, political rivals. Some of it sounds remotely credible; other bits outlandish. But Mr Singh and the nation deserve to know why the government is holding the paper about Mr Shastri's death back. How will it imperil our foreign relations? With whom? India has a notoriously stodgy reputation as far as declassifying historical documents is concered; the state almost encourages a statist historiography. The truth should be out and the controversy should be buried, once for and all.