Hi. I'm Soutik Biswas and I'm the BBC News online correspondent in India, based in Delhi. I have also worked with newspapers and magazines in India and Singapore and am a Reuters fellow from Green College, Oxford. 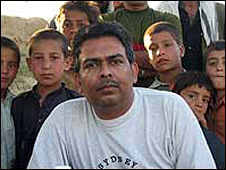 You may remember me from the BBC India Election Train blog (the entries of which are now archived here) which covered the 18-day, eight-city, 6000km tour of India I took along with colleagues during the general elections in April and May. This time, of course, I hope to go on a much longer journey with you.

I joined the BBC some six years ago, and have travelled around the subcontinent covering many stories. But, in the end, no story is more fascinating than India's and how the world's biggest and most raucous democracy is evolving and facing up to its many challenges. The blog is also an effort to try to make sense of the vast changes sweeping the country.

My dream was once to work as a music journalist for Rolling Stone magazine. Or a writer on Mad magazine. Instead, I ended up covering the shenanigans of politicians and their ilk, among other things. But then, with apologies to Mick Jagger and Keith Richards, you can't always get what you want.