First, a confession. I never owned a Sinclair Spectrum; nor did I build my own PC out of spare lawnmower parts in my bedroom. I'm so old that the only computer at my school filled a room and the only pupils allowed near it were boys in white coats, who were prepared to feed it with ticker tape. 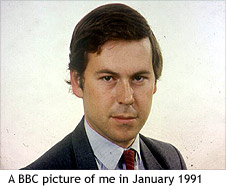 I came late to technology, but that makes me all the more keen to communicate what is exciting and important to as many people as possible.

I am a BBC lifer, having started out at as a researcher on Look North in Leeds in 1981, and spending most of my career as a television reporter covering business and industry. You know the kind of thing - standing in the rain outside collieries and car factories threatened by strikes or closure, trying to interview people who didn't want to talk to you. Then in the mid-'90s, I discovered the internet. Okay, it had been around for 20 years by then - but for me, it was a life-changing experience.

As a business correspondent, it was the source of a whole new kind of story, as new companies were born, flourished and crashed within months. I covered it all for the BBC - they even called me Internet Correspondent for a few months in 2000, before deciding that the internet was over after the dot.com bubble burst.

I went back to my old job, but at home and at work, kept banging on about the profound changes the internet was bringing to our economy and the rest of our lives. Finally, the BBC relented and made me Technology Correspondent at the beginning of 2007.

I live in West London with my wife and two sons who play a big part in my technology journalism. Adam, who is 17, is my consultant on the games industry - despite no evidence of musical talent he took only hours to become a Guitar Hero on the Wii, while I am still being booed off stage. Nine year old Rufus has strong opinions on all kinds of technology ("Dad, why are there no good games on your phone?") and his review of the $100 laptop has won wide praise.

So while I lack geeky credentials - as I keep telling my colleagues, I'm not the man to defrag your hard drive - I am excited by all the big technology questions. Who has built a really smart smartphone? Will Steve Jobs ever crack the video market? Who will win the battle to bring cheap computing to the developing world?

And I'm also convinced there is a huge BBC audience eager to discuss these issues and more. Speak to you soon.