What makes a video viral?

Last Thursday I wrote here about a plan to put an ultra-cheap computer in the hands of British schoolchildren in an attempt to get them interested in programming. The blog post - and the accompanying video which I'd shot on my phone - sparked a reasonable amount of interest, though nothing spectacular. 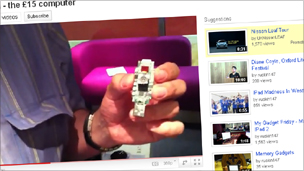 But, in a hurry to get the video off my phone and into the BBC system, I had decided that the quickest way was to put it on YouTube from where it could be downloaded and processed. After the blog post was published, I linked to the original video on YouTube - and within hours my inbox was filling up with comments.

I watched with mounting amazement as views to my YouTube clip accelerated. By Thursday evening it was heading to 10,000 views, but through Friday and Saturday the line on the YouTube Insight page - which I admit became something of an obsession - climbed ever more steeply, passing through 100,000, then 200,000. On Sunday the rate of growth started to slow, but by Monday morning nearly 400,000 people had viewed the clip.

Now I've put other clips onto YouTube over the years, and some have attracted a degree of interest, notably Stephen Fry praising Windows phones. But that got fewer than 9,000 views, so nothing in comparison to the Raspberry Pi clip.

The fact that the clip was shown and promoted on the BBC website obviously makes a big difference - but that was also the case with this clip about the auction of a very early Apple computer, yet it attracted fewer than a thousand views.

I've used the word viral in the title of this post, and many will quite reasonably object that a video promoted (though not linked to) from a mainstream site can never be described as viral. But it's still a puzzle to me to work out what catches the imagination of casual web clickers and what leaves them cold.

There's a clue in one previous viral clip posted by my former partner in blogging Darren Waters. His video of a Microsoft Xbox console at a games show suffering the notorious red ring of death proved immensely popular - and I think there are three reasons for that.

It was about a subject of great interest to a technically literate section of the web population, it was exclusive footage, and it was picked up and spread by a host of bloggers. Similarly, a lot of tech-savvy types are interested in new cheap forms of computing - and my video was the only way to see the Raspberry Pi device and hear David Braben talk about it.

All I need to do now is find something else that everybody wants to see and get some exclusive video. Any ideas would be welcome.