Any idea whether you're getting a good deal from your mobile phone contract? No, me neither - but according to a group of Oxford mathematicians behind a start-up firm called Billmonitor, we are collectively wasting nearly £5bn a year by being on the wrong deal. 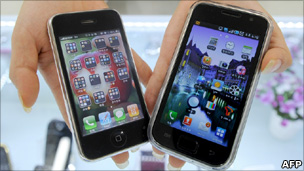 Having put nearly 30,000 bills through their sophisticated number cruncher, they've found that most people massively overestimate how much they will use their phones - and so end up on a more expensive contract than they need.

I used their system to look at my bills - and found that I was using roughly one third of the 600 minutes a month I'm allowed, and just under my 500Mb data allowance. But I turned out to be among the minority of mobile users who would not benefit by moving.

But even the millions who are on a gold-plated tariff may not be able to do much about it in the short-term, though you may be able to get a cheaper deal from the same operator halfway through your contract. And if we really were able to save £5bn a year, the operators would have to respond to losing such a huge chunk of their revenue by adjusting prices.

What I found more interesting in Billmonitor's report was what it showed about the changing pattern of mobile phone use - and the impact that the mass adoption of smartphones is having on our habits.

So here's what an average mobile phone subscriber in the UK looks like. Every month, they will talk for 240 minutes, send 300 texts, and use 133Mb of data. The voice calls, somewhat surprisingly, are still slightly on the rise, but texting is up nearly 50% on a year ago and data use has more than doubled. As the graph shows, the average user is piling on more data every month as they surf the web on the move. 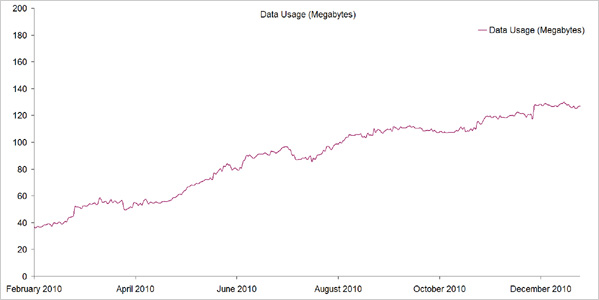 A few more insights into our mobile lives:

But it is the explosion in data use that is really striking.

A few years ago, the arrival of smartphone contracts bundled with unlimited data made millions of phone users far more relaxed about going online. Now, though, the mobile operators are trying to put the brakes on. First they introduced caps on those unlimited deals, now they're beginning to separate out data as an optional add-on to a contract.

We are spending an average of 16 minutes a day using our phones to call or text. But there are no figures for how long we are tapping away at apps, updating our social network statuses, or checking out football scores on the web, though I wouldn't mind betting that for many people that is now the main use for their phones. But the years when that was a free bonus bundled in with a smartphone contract are drawing to a close.

UPDATE: As has been pointed out, I got the abbreviation for megabytes wrong. It should be 133MB, not 133Mb.