Technology for all ages

When I heard about a project aiming to make technology less intimidating for the older generation, I wondered whether it might be just a little bit patronising. Why should we assume that when you reach a certain age you need a phone with big buttons, or a younger helper to guide you around the web?

But instead, a morning spent at Surrey University's Digital World Research Centre taught me something about where technology might be heading in the future. Psychologists, computer scientists and product designers, in a team led by Professor David Frohlich, have been working with elderly people to try to come up with some gadget concepts. 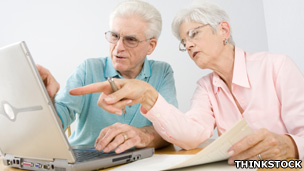 It's all part of wider national programme called Sus-IT, sustaining IT use by older people to promote autonomy and independence. What's different about the Surrey scheme is the part played by elderly people.

I met John and Sonia Williams and Margaret Fry, all in their seventies, and each helping to refine the various gadget concepts with Professor Frohlich and his team. They had varying degrees of familiarity with new technology - from Margaret who had used a computer at work for years, to John who admitted he had never been near one and was only just getting to grips with a mobile phone. But what they had in common was an eagerness not to be left behind by the modern era.

We saw three different ideas for products that would help older people towards a more useful relationship with technology, while reconnecting them with the past. First, the story lamp - when you place an object or a photo beneath it, an audio recoding tells you a story around it. So the photograph album reminds you who were the people in the pictures and what they were doing.

Then there was the reminiscence radio, in effect an iPhone "This Is Your Life" app, allowing the user to click on a timeline and hear music and memories from the past.

And finally the travel glasses, which project images from the present or past onto the lenses, allowing the user to travel around the world or even into the past without leaving their armchair.

Now all of these were concepts, rather than finished products, but Professor Frohlich said the point of the project was that the elderly people had played a part in shaping them. He referred to them as his co-designers and explained: "We ask a very simple question; what would you like to keep, lose or change about the idea and as they think about that and work through it as a group, it's less threatening."

Halfway through the morning at Surrey University, something struck me. The ideas being piloted here were similar to those I'd seen at Microsoft's research laboratory - they all involved abandoning the traditional computer and keyboard in favour of what are called natural user interfaces. Touch, talk, and motion look like becoming the ways we interact with computers in future - often without realising that the computer is there at all.

When technology firms design new products, they look to early adopters for ideas and approval - the elderly are shut out of the process. Yet across today's technology industry, the most successful new products are those which are easier to use. So the Surrey academics and their elderly collaborators could be helping to shape the gadgets of the future.