Quakebook - a triumph of good will and social media

It started with a call issued on Twitter on Friday 18th March, a week after the earthquake and tsunami hit Japan. Now hundreds of writers, video journalists and editors around the world have come together to create a book designed to raise funds for the Japanese Red Cross. 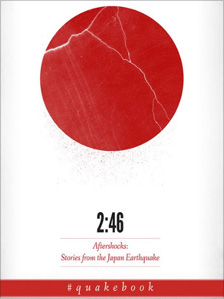 Quakebook is the brainchild of a British man living in Japan who goes under the sobriquet
"Our Man in Abiko". After his Tweet, he fleshed out his idea in a blog post that Friday.

"I'm looking for contributions from anyone who has something to say about the earthquake (eg where were you when it happened, what did you feel? How have you helped? Did it change anything in the way you live your life? Are you coping with grief? Or just bewildered behind a barrage of media images?) I'm not looking for windy poetic stuff, just honest stuff. Aim to write 250-300 words or so - equivalent to a short blog post (or one page of a book)."

What followed looks like a triumph of the collective good will and organisational power of the internet. Contributions flowed in from Japanese people and expatriates caught up in the earthquake and its aftermath. Video images, photos and graphics were also supplied, but perhaps most important was the role played by those people around the world who wanted to help with the editing and organisation of the whole ambitious project.

Among them was a Cumbria-based writer and community organiser Lindsey Annison. She told me why she had got involved: "As an author, but without the necessary credentials to actually write for the book - I hadn't lived through the earthquake - I offered to help in any way I could."

As well as editing some contributions, Lindsey set up a blog for the project, and used the corporate social network Yammer to help organise the massively complex operation that publishing a book in a week involves.

I spoke to her on Sunday, when she'd been up for 36 hours as the project struggled to get over the finishing line. There were all sorts of questions she and the other Quakebook volunteers were trying to answer - could they get Amazon to sell the book, what sort of copyright arrangements did they need, what should they charge.

"If you'd planned this, it would have taken months," Lindsey explained. " There are editors in Brisbane, the US, Japan, all over the place. It just wouldn't be possible without the internet and social media."

A glimpse at the activity on Twitter, where the Quakebook community is using the hashtag #quakebook, gives a flavour of how the project has been organised. Ourmaninbiko - the man with the original idea - tweeted this:

"People of twitter, what do you think about a creative commons (ie cool to copy) copyright for #quakebook Good/bad for charity? Thoughts?"

Others were using the hashtag to try to persuade Stephen Fry to tweet about the book - they've already had a celebrity endorsement from Yoko Ono. There is also a Facebook fan page and a YouTube channel, so it should be possible to promote Quakebook through social media without ever having to spend a cent on advertising.

The book will appear first as a digital download, and then it is hoped that there will be a print edition as quickly as possible.

As I write it is difficult to say just how successful this unique publishing project will prove. But it has already provided a masterclass in how to use the internet to organise something ambitious and complex.

It has also demonstrated just how much good will there is out there amongst the global online community, if only you can tap into it.