It's a familiar story - a scrappy little underdog launches a competition complaint in Brussels about the giant that dominates its industry. Ten years ago it would have been Netscape accusing Microsoft of abusing its monopoly power - today it's Microsoft charging Google with the same crime. 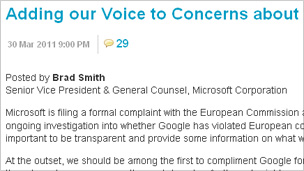 Microsoft's first ever competition complaint is not just a wonderfully ironic turn of events, it's a measure of how the balance of power on the web has shifted. A decade ago control of the desktop and what applications lived on it was still all important - now it's the control of search which delivers huge power and billions of advertising dollars to Google.

So, despite the fact that Office and Windows continue to deliver healthy profits every quarter, Microsoft is determined that its Bing search engine should make serious headway. In Europe at least, that's not happening. According to Microsoft, Google has 95% of the search market.

Now it claims that Google is using its power unfairly to maintain that dominance. Its complaint - which as Google points out is just an addition to an existing anti-trust case in which a Microsoft subsidiary was already a complainant - is that the search company is putting walls around content that rivals need if they are to compete.

In a long blog post, Microsoft's chief legal counsel Brad Smith outlines a series of areas where he says Google is impeding competition. He claims that it's very difficult, for example, for rivals to get proper access to YouTube - owned by Google - for their search results.

He points to the Google Books plan - blocked by a US court last week - as another case where any other search engine will get poor access to valuable content, in this case millions of books.

And he says that Google uses its business relationship with leading websites to block them from installing competing search boxes on their sites.

Google is saying very little. When I spoke to the company I was told they still had not seen details of the complaint. Perhaps they should try to search for "Brad Smith blog Google complaint". When I did that, Mr Smith's blog post popped up right near the top of my Google results, but on Bing was much harder to find. I'm not quite sure what that tells us, except that search is a dark and complex art.

"We readily appreciate that Google should continue to have the freedom to innovate. But it shouldn't be permitted to pursue practices that restrict others from innovating and offering competitive alternatives. That's what it's doing now. And that's what we hope European officials will assess and ultimately decide to stop."

Substitute Microsoft for Google, and that is very much the message that the EU was given year-after-year by companies frustrated by their inability to compete with Windows or Internet Explorer. And when big fines were handed down, Microsoft's supporters in the US lambasted Europe for trying to punish a company that had grown big by taking risks.

Now, though, Microsoft is keen to employ the same EU regulators as a weapon against Google. That could mean a long and tortuous process, or, if Google's lawyers learn from Microsoft's experience, they may try to reach a quick deal with the EU rather than face the risk of a huge fine.

And here's another irony about this case - just as Brussels was still investigating Microsoft's dominance when its power was fading, so the world may have moved on by the time the Google inquiry is over.

The search giant is increasingly nervous about its failure to make a splash in social networking, where Facebook rules the roost. Today's launch of Google +1 - a version of Facebook's "Like" button - is just the latest in a series of moves to try to make the business more social, with little success to date.

So what price, come 2015, another big EU anti-trust case, with Google accusing Facebook of abusing its dominant position in social networking? You heard it here first...