Two big conclusions about broadband from today's Ofcom survey - the days of "up to" advertising may be numbered and copper as a means of getting the high-speed internet into homes now looks obsolete. 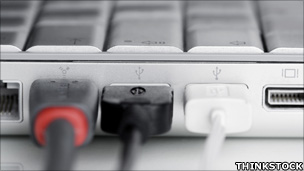 Ofcom's survey, which involved connecting monitoring equipment to routers rather than just a software speed test, gives us a mixed picture of the state of British broadband. On the positive side, Virgin Media and now BT, with its Infinity service, are both beginning to offer some very good speeds to much of the country.

The investment in fibre - either to the home or to the cabinet - is beginning to pay off. Virgin's up to 50Mbit/s service is now available to nearly half of the UK while BT Infinity, promising up to 40Mbit/s, now passes around 15% of homes.

Crucially, both deliver something approaching the advertised speeds and BT Infinity is even giving upload speeds of as much as 8Mbit/s. That is a big contrast with the service customers are getting from the old technology, ADSL, which comes down a standard copper phone line.

In fact, Ofcom's research shows that the higher the speeds that broadband customers are promised on ADSL packages, the less they get. So on an "up to 20Mbit/s ADSL" package, 69% of users surveyed were actually getting less than 8Mbit/s. The problem is that the further you live from the exchange, the slower the speeds down a copper line.

It was this graphic in Ofcom's presentation of the results that really told the story. It compares the speeds achieved by those on an up to 8 or 10Mbit/s service - the purple dots - with those for customers who've upgraded to a 20 or 24Mbit/s deal - the green dots. The dots are plotted along an axis showing the distance from the exchange. 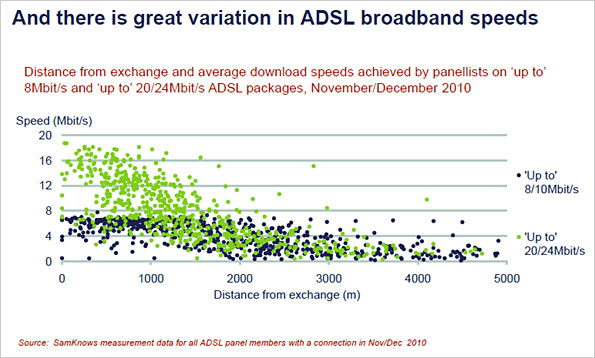 So at less than a kilometre from the exchange, those on the faster packages are getting better speeds. But at anything over 2km, there appears to be little or no difference.

Now BT invested large amounts in upgrading its ADSL network to make it fit for the 21st Century and squeeze much faster speeds out of those copper cables. It looks as if that investment has not really paid off - at least for broadband customers. Perhaps it might have been better for the company to have saved its money to spend on the fibre network it's not rolling out.

Ofcom wants the ISPs to stop advertising "up to x" broadband deals unless they can show that at least some of their customers will get those speeds. At a briefing for journalists, the Ofcom boss Ed Richards was asked what "some" meant, and suggested 5% would be fair. So, with just 3% getting anywhere near their promised 20Mbit/s in the Ofcom research, that kind of deal could no longer be advertised. Instead, the regulator suggests advertising should feature a typical speed range or TSR.

BT is unhappy with that idea and says Ofcom risks confusing the consumer. But Ed Richards says markets work well when consumers have the best information. His ambition is that the TSR should do the same for the broadband market as APR has for the banking industry or MPG for the motor trade - provide an agreed standard that everyone can understand.

Oh, and one other piece of news. Ofcom is working on a national broadband speed map, searchable by postcode, so that consumers can work out what is on offer in their area. It is exactly what this blog suggested last week - though I'm assured they had been working on the idea at Ofcom Towers long before they saw my post.