It is one of the most combustible and gripping documents ever to emerge from a major corporation. When I first saw the leaked memo from Stephen Elop, the Nokia chief executive recruited from Microsoft last year, I had some doubts about its authenticity. After all, it looked far too frank and well-written to have been penned by a corporate boss. 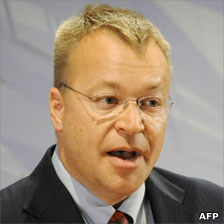 But now we've confirmed that the document first published by Engadget is the real thing - and that means Friday's event where the Nokia boss will unveil his strategy for the ailing mobile giant will be even more eagerly anticipated.

For the past few months, fans of the Finnish business and its phones have been insisting that its troubles have been overstated. They dismiss the idea that Apple or Google have transformed the mobile industry and say it would be madness for Nokia to ditch the Symbian operating system or the newer MeeGo project in favour of either Android or Microsoft's Windows Phone 7.

Now it is clear that Stephen Elop profoundly disagrees with that analysis. He tells his colleagues that their company is like a man standing on a burning North Sea oil platform and must decide whether to plunge into icy waters or perish. He is brutally frank about Nokia's failure to keep up:

"While competitors poured flames on our market share, what happened at Nokia? We fell behind, we missed big trends, and we lost time."

Here he is on the challenge from Apple and Google:

"The first iPhone shipped in 2007, and we still don't have a product that is close to their experience. Android came on the scene just over 2 years ago, and this week they took our leadership position in smartphone volumes. Unbelievable."

Ah, but surely Nokia is handily placed to dominate the developing markets where its cheaper phones have been grabbing a hefty share of the market? No comfort there from Mr Elop either:

"At the lower-end price range, Chinese OEMs are cranking out a device much faster than, as one Nokia employee said only partially in jest, "the time that it takes us to polish a PowerPoint presentation." They are fast, they are cheap, and they are challenging us."

So what's the answer - MeeGo? The CEO says the joint venture with Intel is an example of the great innovation still going on within Nokia, but it's much too slow to get products out - "at this rate, by the end of 2011 we might have only one MeeG product in the market." As for Symbian, the operating system which once ruled the smartphone universe, it is proving to be "an increasingly difficult environment to work in."

Which all begs the question - what is Mr Elop's plan to get Nokia off the burning platform, and does it involve climbing aboard someone else's rig? He does say that the new battlefield is not devices but ecosystems which bring everything from apps to advertising to developers together, and "we're going to have to decide how we either build, catalyse or join an ecosystem".

So does that mean that on Friday Nokia will announce that Symbian and MeeGo are dead and it will henceforth be developing phones using the Windows Phone 7 system - or even the open-source Android? That sounds far too radical - after all, huge amounts of cash and time have been poured into development work.

But now that the Canadian CEO has lobbed a hand grenade into the quiet, understated culture of Finland's mobile giant, all bets are off.

PS. I had mistakenly called Mr Elop American when he is in fact Canadian. This has now been corrected above.