Wayne Ting, nearly a billionaire. Or how Facebook won

I've just met a man who dropped out of college six years ago to work full time on the social network that had grabbed the attention of everyone on his Ivy League campus. 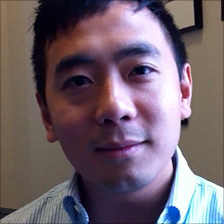 No, not Facebook's Mark Zuckerberg, but Wayne Ting, the creator of Campus Network. I was fascinated by his insights concerning the small things that meant Facebook became huge while his network faded away.

Wayne has now gone back to college, studying for an MBA at Harvard; I went to meet him after going to have a look at the college dorm where Mark Zuckerberg started thefacebook.com, as it was first known, in 2004. But in 2003 Ting was studying at Columbia, another Ivy League college.

That year, he and another student Adam Goldberg launched a website called CUcommunity. They had seen another early social network, Friendster, but none of their friends was on it:

"We thought you needed a community where people would feel safe and where they had enough social nodes - that was college."

Their network quickly caught on, and soon three quarters of Columbia students were using it. CUcommunity was quite a sophisticated network, offering photo-sharing and blogging, as well as the poking and friend lists that Facebook would later make familiar. "It was the place you would go to if you wanted to find out what was going on," says Wayne.

They had always planned to take it to other Ivy League colleges, and by 2004 the two students were leaving Columbia and heading to Montreal to work full-time on what they were now calling Campus Network.

They hired three software programmers, and got themselves an office which was also their home.

"We used to get up really early and hide the airbeds under the desks because we didn't want our employees to know we were homeless."

They threw themselves into the project, but to no avail. Facebook, which had launched at the beginning of 2004, was soon cleaning up on campuses across the USA. It was when they saw traffic begin to dip on their home territory, Columbia, that Ting and Goldberg decided to throw in the towel.

Why did Facebook, which launched later and was a less sophisticated network, still win the day? Wayne Ting thinks there were two main reasons - the speed at which Facebook moved, and the very simplicity of its early format.

Facebook had 90% of Harvard students using it within days of its launch and then very quickly started moving to other campuses. So when Campus Network turned up at those same colleges it was too late:

"The network effect is incredibly powerful. It takes a lot of time to create and look after a profile - you will always choose the network with more people."

But the Campus Network founders thought back then it was strange that students would choose Facebook:

"Why would you go to a site that only had poking and a photo when you can share photos, share music share your thoughts on a blog?"

Today he concludes that people just weren't ready for that level of sophistication back then - in fact it may have put them off Campus Network.

"A good website should have functionalities that 70 or 80% of users want to use. We had functions that only 10% wanted - nobody blogged, nobody even blogs today."

The result was that the network seemed a little too geeky:

"You started to get folks that were less cool, they weren't the hippest kids on campus - and that had a negative network effect."

Of course, the irony is that Facebook gradually added all those functions that had been on the rival network from the start:

"What Facebook did that was incredibly smart was to hook them with the friending and the poking and then they learned with their users, and added functionality slowly over time as users became more comfortable."

Just a few small details in the execution of a business can make the difference between coming first and coming nowhere. Wayne talked admiringly of Mark Zuckerberg's focus and his ability always to think about the next thing. When I asked him what he thought when he saw how wealthy and powerful his contemporary had become, he admitted: "It's difficult not to feel some sense of envy."

The man who could have been a billionaire, if his network hadn't been just a little too sophisticated for its own good, had that most attractive of American traits, an ability to laugh at and learn from failure. Wayne told me he had been to see The Social Network, the film about Facebook, and had been amused by the bit when the Winkelvoss twins had claimed that it was all their idea. "My thought was - we had it six months before you had it, should we sue?"

And he takes comfort that he's played a small role in the creation of what is now a huge industry:

"I don't know that many people in their entire life who've had a brush with a 40-billion-dollar idea. We didn't capture it - but I'm proud that we are a part of that story, however small."