Google, Amazon and the end of web innocence?

For the giant web firms born on America's west coast, one principle has always been sacrosanct: commitment to freedom of expression. 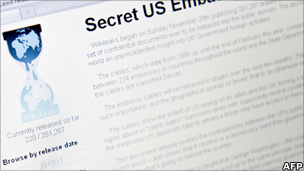 That's been accompanied by an insistence that they are technology platforms, not media businesses, and so can't be held responsible for the actions of those who use their services.

Last month I noted that two of those giants, Amazon and Google, were diluting that pure stance in the face of commercial and political realities and now it seems to be happening again.

First, Amazon, the company you probably know for selling books and which also has a large-scale service for hosting websites. One of these had been the Wikileaks horde of leaked US diplomatic cables - but no longer, prompting suggestions that Amazon was bowing to pressure from American politicians and sparking outrage from some customers who felt that the company was abandoning a commitment to free speech. "Guess I am going to have to find somewhere other than Amazon to do my Christmas shopping," responded one tweeter; Wikileaks' own Twitter feed put it like this: "If Amazon are so uncomfortable with the first amendment they should get out of the business of selling books."

Just as when the online retailer decided to remove a book promoting paedophilia from its virtual shelves, Amazon appears to have realised that a giant American business cannot simply ignore public opinion or political realities. Mind you, it's hard to know exactly what Amazon thinks - I've tried repeatedly over the last 24 hours to speak to the firm, with no success. The company has put out a statement denying that "a government inquiry prompted us not to serve WikiLeaks" and going on:

"Amazon Web Services... does not pre-screen its customers, but it does have terms of service that must be followed. WikiLeaks was not following them."

The second case is Google, where the pressure has come from some within the media industry, angry at what they see as the search engine's amoral stance on copyright infringement. Google has insisted until now that it's not its fault that a search for "Lady Gaga MP3" tends to lead users straight to illegal download sites - it's all down to the mysteries of the algorithm. It's also maintained that its only aim is to give search users exactly what they are seeking.

But over the summer at least one music industry trade body was lobbying Google, in what was apparently a "constructive dialogue", to make it a little harder for users to find pirated material. Now Google has announced a series of measures which it says "will give rightsholders choice and control over the use of their content." Two parts of the announcement appear particularly significant.

Google says it will act to prevent terms that may be connected to piracy appearing in "autocomplete" - so when you start typing "Lady Gaga MP3", the search engine won't automatically suggest "free download" or "torrent". And Google says it will try making authorised content a bit more obvious in search results.

So does this mean the company is tinkering with that sacred algorithm to promote "good" results above "evil" ones? Absolutely not, says Google, and links to sites that illegally host copyright material will still show up in search results.

It does seem likely, though, that when you search for Lady Gaga in future you may find yourself looking at a video leading to an official download service, rather than to a file-sharing site. Is that what users are really seeking?

A few weeks ago the search firm made the number of the Samaritans visible to people searching for terms relating to suicide, a move obviously in the public interest but one that opened the door to pressure for more tinkering.

The innocent days when young web firms could pretend that they were simply agents of free expression based on neutral technology seem to be coming to an end. They have grown up into giant media empires, so they can expect every lobbyist, every politician and every pressure group to want to shape the way they do business.