Six months after swarms of shoppers queued to buy Apple's iPad, today marks the beginning of real competition in the tablet market - and it comes from Android. I've spent the weekend playing with three new Android tablets and trying to work out whether they are smart enough, big enough, and cheap enough to compete with the machine that has defined this new market.

The Samsung Galaxy Tab, a seven-inch tablet unveiled in Berlin in September goes on sale this morning, while both the Advent Vega and the Toshiba Folio are larger iPad-sized devices which should be available in the next couple of weeks. All three are running Android and are early entrants into a market which could be the biggest thing to happen in consumer electronics for a decade.

Right up until the moment the iPad went on sale there were plenty of questions about whether there was a space in the market between the smartphone and the netbook for another device and, if so, what exactly people would use it for.

The sales figures for Apple's shiny plaything then proved the sceptics wrong, and every month technology analysts have been raising their forecasts for the tablet market as a whole. What's more, the iPad is already invading businesses as well as homes, finding a much wider range of uses than had been imagined.

So let's look at the Android challengers and work out whether they will expand this new market - or even take some of it away from Apple.

I'm not going to say much about the Advent or Toshiba because I was supplied with devices that were not quite the finished product and there'll be a couple of tweaks before they go on sale. But both promise to be substantially cheaper than the iPad and a first glance suggests they will offer a decent enough surfing, viewing and social networking experience.

Their real disadvantage is a lack of apps. They are running on an operating system which is not quite ready for tablets. Android 2.2 is still really a smartphone system, and Google does not allow devices with screens bigger than seven inches to have access to its app marketplace. That will change when a new version comes out next year, but for now the larger tablets have jumped the gun.

The Samsung Galaxy Tab is another matter altogether, a very polished product with a number of features that don't exist on the iPad. So what should be the key comparisons? As is my habit, I turned to a popular social network and asked which three tasks I should set for the Tab. Some suggested jobs that seemed more suited to the workplace such as:

"The ability to annotate a document, save and send the annotated version so it's compatible with all formats and OS."

However much some people - me included - have found that tablets can function as work devices, I reckon they are primarily going to be sold as multimedia playthings. So it was this suggestion that I thought most suitable:

So I'm going to take those in reverse order.

Read the BBC News website and watch a clip

This is a good test of what will be a prime use for any tablet, simple web surfing. I used the Google voice search function on the Tab to get to the site, where I found pages rendered quite swiftly and efficiently. I headed straight for the Technology section, of course, and clicked on a video, which, after a short pause, played without a hitch.

On the iPad, surfing around the BBC News site was equally smooth - until I came to that video. Because the iPad does not support Flash I wasn't able to play it. I could have used the BBC's iPad app where some of the videos are available, but on this test the Android came out on top. 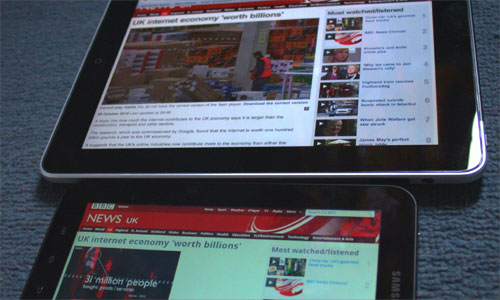 Get a book onto it and read it

After glancing quickly at the Tab's "readers hub", which offers access to various newspapers and magazines, and to the Kobo online book store, I realised there was a simpler way to get a book. I'm already reading Howard Jacobson's latest novel on an iPad via the Amazon Kindle store. The Kindle platform works on a range of devices, including Android tablets, so I downloaded the app and then the book and I was away. Like the iPad, the Tab has advantages and drawbacks over e-readers without backlit screens - it's great in the dark, but not so good in sunlight.

The question now is whether the newspaper and magazine groups which have embraced the iPad like a drowning man offered a lifebelt will be just as enthusiastic about Android devices. My guess is that they will wait to assess the size of a somewhat fragmented market before diving in. But one paper, the Financial Times, is already promising an app for the Samsung tablet. 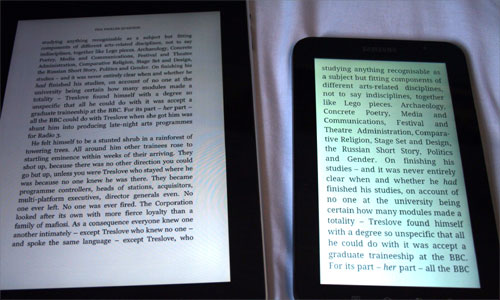 Get a film onto it and watch it

On the iPad this is pretty easy - if you are happy to shell out for a movie from the iTunes store. Apple, for good or ill, offers you a seamless media experience if you stay inside its iTunes walled garden - outside it's a bit trickier.

On the Galaxy Tab, I found the Samsung Movie store, which required a lengthy sign-up process. But typing on the small screen wasn't much easier than on a smartphone so I abandoned it and went to my computer where I finally managed to get registered and chose a movie. Then I got stuck in an eternal loop where the Tab kept asking me to sign in again before I could download - after half an hour I gave up in frustration and watched a couple of movie trailers. The screen is fine, the quality reasonable, and I can see people watching downloaded movies on a train, but I'm not clear why they would use this at home - and the evidence from iPad users is 80% of them never take the device out. 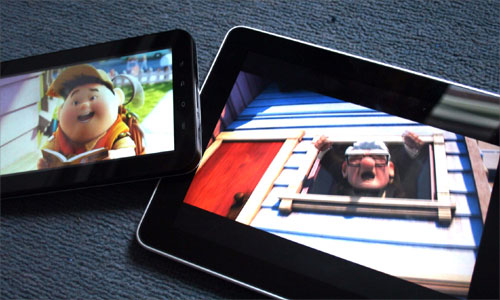 So I reckon Samsung won the web test, Apple wins on movies, and it's a draw on books, making it 1-1 overall.

But the Galaxy Tab does have some other advantages over the iPad. It can make phone calls - though you'll look very Dom Joly if you don't use a headset. There's a camera to shoot stills and make video calls, if you can find anyone with the right kind of phone. There's access to an impressive range of apps - I installed the Ocado shopping app complete with barcode scanner - though I found Google's marketplace was subject to frequent glitches. And Google's various services, from voice search to navigation, add to its functionality.

There are two big doubts for me about this device, its size and its price. Is there really a big enough niche in the space between a smartphone and an iPad for a tablet with a seven-inch screen? It's too small to be a comfortable place to type more than a short message, whereas on the iPad I managed to write most of this blog post. It is being sold as a more mobile device but you can do just about everything the Tab does on a much more portable smartphone.

And, while there's still some fuzziness about pricing from mobile operators, a sim-free price tag of £529 looks pretty steep. Yes, it's about what a 3G iPad costs, but that's established itself in the market. Surely Samsung needs to undercut Apple's device if it's to find much of an audience?

Still, once the much more affordable Advent and Toshiba tablets are in stores, there will be a decent choice of alternatives for consumers who want a touchscreen computing experience on the move. But it may be the spring before we see an Android that is big enough, smart enough and cheap enough to take on the iPad.