Thought Google had lost its way? Messing about with robot cars, and other side projects like Wave and Buzz that are a distraction from its core business and are failing to please either consumers or investors? Well look at the search firm's latest financial results and marvel. 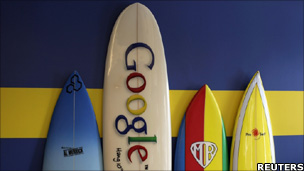 In the last three months Google hauled in over $7bn in revenues, up nearly a quarter on the same period a year before. And of course that cash comes not from driverless cars or building high speed broadband networks across US cities or social networking ventures - it all comes from advertising.

Look at Google's UK revenues - in the last six months they amount to $1.5bn or around £1bn - and work out just how big a player the firm is in the local advertising market less than a decade after its arrival.

By contrast, ITV, earned £728m in advertising revenues in the first six months - a big improvement on last year but still a way behind Google. Online advertising has weathered the recession well and one firm appears better placed than any other to benefit as it accelerates again.

And it's not just the old staple, search ads, which is behind the surge in revenues and profits. Google says it's now earning more than $2.5bn from display advertising and $1bn from mobile.

What's clear is that some areas which looked like a costly diversion are now proving their worth.
Take YouTube for instance, which once looked like a big sink down which Google kept pouring cash.

The other day I got an e-mail offering me a revenue-sharing deal for one of my YouTube videos - it was of Stephen Fry at the Windows Phone 7, giving Microsoft's phone a surprise endorsement. The deal, which I naturally declined, involved a share of revenue from putting adverts next to my video.

But Google says over two billion YouTube videos every week are now part of this advertising programme, providing an increasing flow of cash for both their owners and of course for the search company. Whether or not that makes YouTube profitable is not revealed in the accounts - but Google is hinting strongly that it is there or thereabouts.

Then there is the Android adventure - why spend a fortune developing a mobile phone operating system and then simply hand it over for nothing to manufactures?

Well Google says the idea is that the more smartphones there are out there, the more they will be used for search, and the more advertising that will generate. And with mobile search up 500% after a year in which Android phones have taken the market by storm it's hard to argue with the strategy.

Now there are plenty of Google activities where it is hard to see any contribution to the bottom line. Its engineers are still being allowed time out to work on wacky ideas, many of which quickly fail.

You might think that it is now time for the company to grow up and take life a little more seriously. But as long as it keeps churning out bigger and bigger piles of cash, indulging in a few eccentric hobbies looks like a strategy for success.