Ferraris for all: Superfast broadband comes to Britain

In the British broadband race, Virgin Media has moved into the fast lane, promising to deliver 100Mbps across its whole network by the middle of 2012.

BT is also building a faster network, based on fibre, though its service tops out at 40Mbps. By 2012, so we are promised, UK homes and businesses will have access to some of the fastest broadband in the world.

But just a couple of questions? Is there really a demand for 100Mbps? And is there a risk that the gap between the fast cities and the slower countryside will now open up? 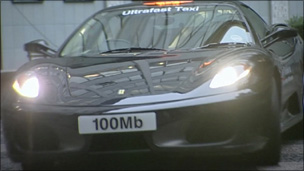 First of all demand. To illustrate the merits of its new service Virgin Media brought a Ferrari to BBC Television Centre this morning. But just how many people really need a Ferrari service - especially when surfers trying to hit 100Mbps are likely to hit the same speed bumps as the Ford drivers negotiating our broadband infrastructure.

Virgin released figures today showing a big increase in customers using what it calls its "top tier" services, so over 700,000 now have 20Mbps or 50Mbps broadband. But of those just 92,000 have opted for the current Ferrari, the 50Mbps meg deal.

Still, once 100Mbps is on offer, there'll presumably be a big rush by customers to upgrade from 20 to 50Mbps. A few years back, we all wondered why anyone would need more than 2Mbps, but from video conferencing to online gaming, people are finding uses for higher speeds.

Virgin reckons that homes packed with smartphones, tablets and other connected devices will find they need the extra bandwidth.

Is there a risk of a new broadband divide opening up? Yes, of course, when Virgin Media and BT between them are making it clear they will only be able to cover two-thirds of the country with fast fibre-based broadband.

There will be around £500m from the BBC licence fee over the next four years to help fund rural fast broadband schemes, but it's not clear just how many homes that will reach. After all, we were told a while back that the cost of covering the whole of the UK in fibre could run into billions.

When I spoke to the redoubtable rural broadband campaigner Chris Corder via an internet call today, she was adamant that the "final third", as some call it, should come first.

Chris, whose excellent video about what digital technology means to her can be seen here, has battled to get her village in Lancashire any kind of broadband connection. Now she says the countryside needs speed more than the cities, and should be prioritised by Virgin Media, BT and the government.

Well, I don't think that is likely to happen, but campaigners like Chris aren't going to go away. Even if plenty of people in the cities don't really see a personal need for 100Mbps broadband, there is a real fear out there in rural Britain that those without the possibility of such a service are going to be disadvantaged.

Ferraris for the many, not the few - now that could make a rallying cry for those left out of the fast broadband era.