"Why do I do this every day?" For years, these words were painted in big white letters on a fence alongside the M40 motorway on the approach to London.

It always sounded to me like the anguished cry of a commuter and it will strike a chord with anyone trying to get to work in the capital today.

A tube strike has brought travel chaos - of little concern to those of you outside south east England but a subject dominating conversation around the water-coolers, both real and virtual. What's this got to do with technology, I hear you ask.

Well two things - commuters and media organisations are using the latest social media tools to document the travel situation and to obtain information, while beginning to ask whether spending hours on the move is really necessary in this connected age.

One innovation is a crowdsourcing experiment run by my colleagues at BBC London. They have set up a London Tube Strike Map to plot commuters' experiences as they head across town. 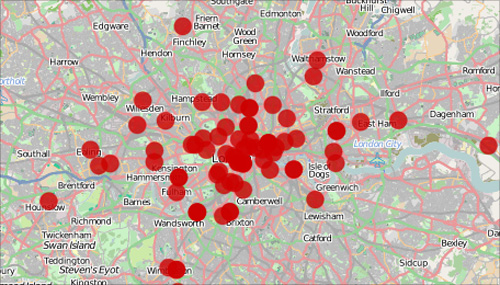 It is the brainchild of Claire Wardle, who has been working on the intersection between social media and newsgathering. She explains here here how she decided to use the Ushahidi platform, which was invented to plot civil unrest in Kenya, to gather pictures, reports, anecdotes from London travellers.

Now this is all information that should be available either from the Transport for London website or from the BBC's own travel news service, on radio, TV or the web.

But official sources still struggle to keep up to date - sometimes the crowd is faster with the news, as long as you accept that these are anecdotal rather than official reports.

There were about 90 reports on the map by mid-morning, which seems a little sparse to me. But Claire Wardle was satisfied as the project had only been publicised on Twitter, rather than on air, and the whole exercise had been something of an experiment.

A few lessons have been learned - each report really needs a time stamp to be useful in a fast changing situation, and more people may need to be accustomed to using smartphones if the traffic to maps like this is really going to take off.

But surely there is a simpler technical answer to coping with traffic chaos - just work from home. Many of us now have all the technology you need - a computer and a decent broadband connection to do as much of our work from the front room as we could in the office.

But I sense there is still reluctance by many employers to allow staff out of their sight. I asked a few people on a popular social network about their employer's policy.

Quite a few were allowed to stay home, but others said the practice was discouraged: "we were told to make it in if we could - ie come in", "we are being robust: no extra home working, take holiday if you can't get in" and "no but if we work through lunch we can go home early."

Of course, the BBC would be perfectly happy for me to work from my high-tech home studio, broadcasting down an ISDN line, or sending video clips over my fast broadband line.

But I struggled in for a meeting at my office with people from a technology firm who had come all the way from Cardiff to see me. We could have just talked on the phone but I think we achieved more gathered around the same table, especially as I dragged in a couple of colleagues to take part.

Even in the connected age, face to face contact still matters. But that message "Why do I do this every day?" has now disappeared from the fence alongside the M40. Perhaps the graffiti artist is now working from home.