A 16-year-old who turned up at a hacking event a couple of months ago may just have achieved two great things. If Isabell Long's idea works, it could make a major contribution to getting Whitehall to cut its energy use. 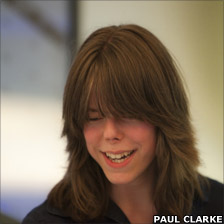 What's more, she could convince others that messing about with software and data is not a sad activity undertaken only by teenage boys who need to get out more, but is in fact really rather cool.

Let me explain. The prime minister has today challenged government departments to make big savings in the energy they use over the month of October.

Big deal, you might say, we've heard that kind of green tokenism before and it never amounts to much.

But the difference this time is that the energy savings made by each department will be highly visible, recorded each day on an online table. And that's largely down to the efforts of Isabell.

She turned up at an event called Young Rewired State, where 15-to-18-year-old software developers - and yes, there are plenty of them - get the chance to work with government data to create something useful.

Ideas came teeming out of the teenagers: from a social network for people taking books out of libraries to something called Better Off in Bed, which would examine jobs and work out whether you were better off working or on benefits.

But Isabell's idea reflected her green interests. She had spotted that various government departments were now publishing data about their own energy use, but it was spread over a number of different websites.

She decided to gather it all together in one place and create a Whitehall energy league table so that the public could see who really was making an effort.

"I started coding last year; I really love it and the whole community around it. I think there needs to be far more awareness in schools - they should teach coding at GCSE. It's not just for geeks and I hope to be a developer later on."

Somehow 10 Downing Street, which was looking for an eye-catching way to promote an energy-saving competition, got to hear about Isabell's idea.

After a few weeks of toing and froing and general Whitehall head-scratching, it has now been put at the centre of David Cameron's energy challenge. You can see her idea, GovSpark, right here.

Emma Mulqueeny, who runs Young Rewired State, and is a passionate advocate of the benefits of opening up government data, is naturally over the moon about all of this.

"We're especially proud," she says, "that as one of only three girls attending Young Rewired State, Isabell's work on GovSpark has been recognised in this way. We started this to coax the coders out of their bedrooms and bring them together to work with government data."

But here's the irony about an idea which could contribute to saving government money. Young Rewired State has tried and so far failed to get government departments to sponsor next year's event. At a time when they're waiting to hear about the effect of the cuts, it isn't surprising that they're being cautious with their cash.

But will another Isabell turn up next year to prove that girl - and boy - geeks can help save public money? Only if someone scrapes together enough funding to make it happen.