The Times paywall: Hit or miss?

So how is the great paywall experiment going at the Times? 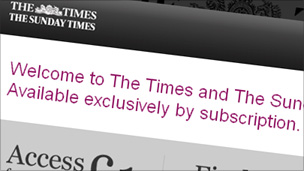 We now have two early indications (though neither from the newspapers themselves) and they provide conflicting views on the eagerness of people to pay for their online news.

First came the report from the web analytics firm Experian Hitwise that showed that two thirds of the Times and Sunday Times web traffic had melted away after the paywall went up at the beginning of the month.

At first glance, that should have them doing the conga around the Wapping newsroom. After all, the bosses at Times Newspapers had made it clear they full expected at least 90% of the audience to depart, so if they'd persuaded a third of them to pay to stay, that would be deemed a huge success.

But then this afternoon a site called Beehive City had some figures that may have made the champagne go flat at the Times. According to the site, just 15,000 people have signed up to pay for access to the papers' two websites - and don't forget that there was an opening offer of £1 for 30 days.

Beehive City says more than 150,000 registered during the free trial period but it appears that only a small minority then opted to pay. The Times won't confirm these figures, so why should we taken any notice of an obscure website?

Well Beehive City is run by Dan Sabbagh, who until last November was the media editor of the Times, so I think we can assume that his sources are excellent.

So why the great gulf between the two sets of figures?

Well it's probably not as big as it first appears. Hitwise is measuring traffic which will include many people who arrive at the Times home page and then decide to go no further. And even if there are far fewer visitors, having paid their money they are likely to come to the site far more regularly and spend a lot more time there.

The strategists at the Times always thought that there was a better future in serving a small select audience of dedicated paying customers than a mass of passers-by - but 15,000 looks a little too select.

Still, Mr Sabbagh does have one set of figures which he believes will cheer up Rupert Murdoch and his lieutenants. He says that 12,500 people have so far paid for The Times app for Apple's iPad, which at £9.99 for 30 days is more expensive than access to the website.

Given the limited number of people who have an iPad that is quite impressive, and the app itself is a very enjoyable way of reading the Times on a small screen. Mind you, if like me they find that downloading the Times each day can crash their device they may not be keen to pay up next month.

It's too early to judge whether the paywall experiment is going to work. But at the moment it looks as though readers are happier to pay for a dedicated application, which can be simply downloaded onto a tablet device than to be bothered with going through the rigmarole of registering on a website and then handing over their credit card details.