What would it cost to create and run a government website for three years? 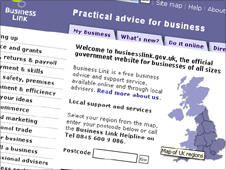 After we covered a couple of stories about government spending on websites and iPhone apps someone got in touch to suggest we take a look at one particular site, businesslink.gov.uk.

The correspondent said this site, run by Her Majesty's Revenue and Customs (HMRC), had cost £35m a year to build and operate for three years and suggested that it had been poor value, delivered an unsatisfactory service to users and proved technically shaky.

I could not quite believe that figure - it sounds an awful lot of money for one site
but it turns out to be true. Businesslink.gov.uk was among the sites singled out last week by the Cabinet Office as very expensive in terms of cost per visit.

When I went to the lengthy document [941.60KB PDF] in which the Central Office of Information (COI) examined central government websites, I found that £35m staring out from a table.

Only the NHS Choices site, at £21m, comes anywhere close. But it has around six million unique users a month, whereas the Business Link site, which offers all kinds of advice to businesses, has just over a million.

The site is the work of a major outsourcing company called Serco, which has sub-contracted the technology to a little business called BT. So how do the costs break down?

The COI report has some detail - £6.2m on strategy and planning, £4.4m on design and build, £4.7m on hosting and infrastructure, £15.3m on content provision and £4.5m on testing and evaluation. What I can't work out is why that cost is repeated for three years.

But I freely admit my knowledge of website development is sketchy so I consulted a couple of experts. One had helped build a customer support website for a major retailer, to cope with similar traffic to that experienced on the Business Link site. That had been built in-house but a supplier had quoted roughly £1.5m to build it, plus £150,000 in annual running costs.

Then I went to Sean O'Halloran at a firm called Hoop Associates which builds websites, mainly for public sector clients. So what was his reaction to that £35m?

"It's a completely unfathomable number, I can't imagine how that could be spent." Mr O'Halloran had an interesting theory though, he claims that government departments are still locked into a big supplier, technology driven way of thinking when it comes to building websites.

"Most of the big sums go on the technology, which is wrong. They should first work out what they want to deliver, then source the technology." He said that these days there were plenty of cheap or even free sources of technology that did not involve going to big companies, but that civil servants felt more comfortable dealing with the kind of suppliers who have always been involved in major IT projects.

To be fair, the creation of this website was driven by the small business community, which thought that the old Business Link network of offices across the country was a waste of money.

Firms told the government they wanted this service delivered online, and the Federation of Small Business told me its members were pretty happy with the results, though they were not aware of the costs of the site.

HMRC and its supplier Serco also put up a robust defence. HMRC said the businesslink.gov.uk site delivered benefits of over £800m a year to companies - a huge return on the £35m invested. I always wonder how those kind of figures are worked out, in the public or private sector.

Serco also cites that £800m figure and goes on to say that it has continually looked for efficiency savings since winning the contract in 2005, and these have amounted to £44m so far. And it's promising more:

"We recognise the unprecedented fiscal challenges facing the nation and we welcome the opportunity to work with Government to continue to deliver even greater efficiency savings."

Earlier this week we reported on the sums being spent on government iPhone apps - which now look really good value compared with the lavish spending on websites.

But there does seem to be a troublesome culture in the public sector when it comes to using technology, whether it is in Whitehall or across the education system, or in the National Health Service.

It seems to involve deciding that you need the latest thing - a smartphone app, a wireless network for a school, an interactive website for small businesses and then putting the job in the hands of a technology supplier, preferably a big and expensive firm. The complex rules on public procurement make it easier for big established - and expensive - firms to win the contracts.

But another culture is now making its presence felt in Whitehall, the open data movement. It involves releasing the vast amounts of data locked inside government departments and letting anyone who wants to hack it into something useful for nothing. Perhaps, in these straitened times, it's this culture which will now thrive.