Here are some headlines from Ofcom's broadband briefing: 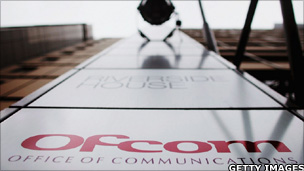 Ofcom's boss Ed Richards did not put it in those terms. In fact, he resisted pressure from journalists to be a little more black and white, but that was certainly the regulator's message as he took us through the latest study of the broadband speeds consumers are actually getting.

The survey shows there has been a small increase in average speeds but nearly all of that is due to a doubling of what cable customers are getting.

Customers still getting their broadband down a copper wire from BT or one of the firms using its Openreach network have seen their average speeds nudge up just a tad from 3.7Mbps to 4.0Mbps.

But even those customers who have moved on to faster copper connections using the ADSL2+ technology do not seem to be getting what they've paid for.

The most striking slide in Mr Richards' presentation showed the average download speeds for people on "up to" 20Mbps copper deals. 65% were getting less than 8Mbps, 32% between 8 and 14Mbps, with just 2% getting 14-20Mbps.

Virgin Media, whose cable network was shown to deliver real speeds much closer to those advertised, will no doubt be buying advertising space to trumpet the results of Ofcom's research, while BT will be hoping that nobody notices it.

Ofcom was keen to promote a new voluntary code which should come into force over the next year, allowing consumers to get out of their contracts if they are not getting what they were promised.

To be fair, most broadband firms do try to give prospective customers an idea of a realistic speed for their location, though some DSL suppliers seem to promise more than others, even when they are using the same infrastructure.

The burning issue seems to be the way broadband is advertised, and Ofcom was keen to stress that was the responsibility of the Advertising Standards Authority (ASA).

But Mr Richards offered the opinion that if ISPs advertised speeds of up to 20Mbps, then at least some of their customers - maybe 10% - ought to be able to get those speeds.

The ASA told the advertising watchdog was currently reviewing this topic, and hoped to have something to say over the next few months - though a spokesman said they hadn't been bombarded with complaints about broadband speeds.

But the other message emanating from Ofcom was that while fibre is the future for broadband, that means the digital divide between town and country is bound to grow.

ts figures show that townies are already getting twice the average speed delivered to country dwellers, and as they start taking advantage of the fibre networks spreading through towns, the gap will widen.

With the government's deadline for delivering a minimum 2Mbps service to all homes extended from 2012 to 2015, a few places in rural Britain may feel that they're being left far behind in the fast broadband revolution.

Ed Richards was not going to get involved in the debate about how we pay for a next-generation network; all he would say was that it was beginning to make a difference:

"There's an investment process taking place and this research illustrates why this needs to happen."

Broadband in Britain is getting faster, slowly. But consumers may feel that the gap between the industry's promises and what it actually delivers is getting wider.