Government apps: A case for the axe?

Last week the government announced that it wanted to close many of its websites to save money - but should it also be looking at what it spends on developing applications for smartphones? 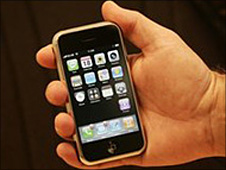 A BBC freedom-of-information request sought to find out just how many iPhone apps were in development by government departments. We discovered that there were at least six apps, some of them out already and others still in development.

The apps include three from the Department of Health, a quit smoking app, a drinks tracker which monitors your alcohol consumption, and, released in time for the World Cup, the Football Fan Fitness Challenge.

The Foreign Office has a travel advice app, and the DVLA is developing something called Motoring Masterclass, which will apparently show you how to change a wheel, charge spark plugs and other useful motoring advice. The documents released about this show that it will cost £40,000 to develop.

The Department for Work and Pensions has Jobcentre Plus job search for both iPhone and Android phones, developed at a cost of £32,775 plus VAT. The DWP says this had been downloaded more than 50,000 times after 10 weeks on Apple's App Store.

Intriguingly, the Home Office responded to our request by refusing to confirm or deny that it was developing any apps, citing security grounds which absolve it from supplying some in formation under the FOI rules.

We are left to speculate that boffins at the Home Office are developing a secret app to be used by MI5 or Special Branch, perhaps using facial recognition technology.

Now all of these apps are free to download, so is this really a great use of scarce government cash? You might argue that it is an excellent way for government departments to use the latest techniques to get important messages about health, work and transport issues to citizens.

But do people who can already afford a very expensive device really need free help from the government to find a job or quit smoking? One government department pointed out to me that these apps were developed under the previous administration - so don't be surprised if the coalition decides that apps are a suitable case for the axe.

Update 6 July 0800: It appears that there is indeed some scepticism about iPhone apps within the new government. The Cabinet Office sent me this statement:

"The Government recently announced a freeze on all marketing and advertising spend for this year and this includes iPhone applications. While the Government wants to ensure that information and services are available in the most efficient and convenient forms, future spend on iPhone development will be subject to strict controls: only essential activity, approved by the Efficiency and Reform Group, which is chaired by the Minister for the Cabinet Office and the Chief Secretary to the Treasury, will be allowed."