Who is best placed to predict the outcome of the general election: the pollsters, the bookies or the boffins - by which I mean a new breed of computer scientists who have tried to analyse sentiment in online discussions and draw conclusions from it? 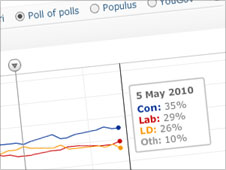 The pollsters have done pretty well in predicting recent general election results - at least since 1992 when they underestimated the Conservative vote by a spectacular amount. This time, though, they are in an extremely nervous state of mind becuase of the unique nature of this campaign. Its closeness, and in particular the emergence of the Liberal Democrats as a significant force, are making it very hard to translate headline poll figures into seats. Nevertheless, the polls have nearly all been predicting a hung Parliament for some time. The latest figures in the BBC's poll of polls are Conservatives 35%, Labour 29%, Liberal Democrats 27%, and others 10%.

Feed that into our seat calculator, which assumes a uniform national swing (but not any differential swing in marginal seats which is quite possible) and it gives this result: Labour 272, Conservative 270, Liberal Democrats 79, and others 29. In other words, something close to a dead heat between Labour and Conservatives, with neither able to form a government without a lot of horse-trading.

Turn to the bookies, and you get something rather different. Online bookmakers Betfair showed me a chart which tries to track the way the mood of punters changed over the campaign, with a hung Parliament becoming the favourite in the second half of April, then a Tory overall majority moving into the lead last weekend, before slipping just behind no overall majority again in the last couple of days. But the company, which is taking bets in every constituency, has used that data to produce this forecast of the shape of a new Parliament: Conservative 325, Labour 212, Liberal Democrats 86. That would leave the Tories just one seat short of an overall majority. 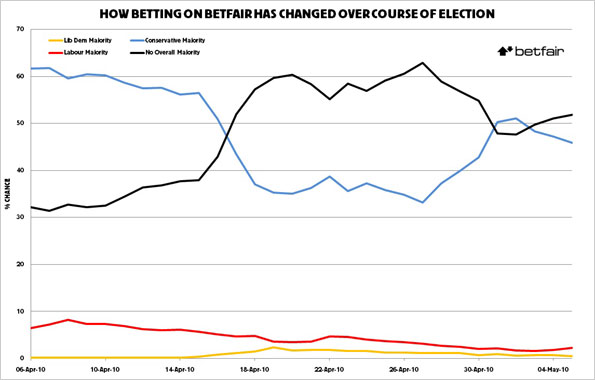 Ladbrokes is also offering odds on every constituency, and it too predicts that the Conservatives will be the largest party, just a little short of an overall majority. Its prediction for seats is: Conservative 313, Labour 212, Liberal Democrats 88.

Both firms claim that by looking at the weight of money in individual constituencies they can make a better fist of predicting the election than pollsters who assume a uniform swing.

And now to a third category of soothsayer from the new enterprise of sentiment analysis - or "voodoo" as one distinguished pollster described it to me. To be fair, most of the companies which have been analysing the mood of users of sites like Twitter and Facebook have been careful not to go as far as predicting the overall result. But Tweetminster, the firm which tracks political tweets, has really stuck its neck out. It's conducting an experiment to work out whether activity on Twitter correlates to electoral success. As of 4 May, it's found 433 constituencies represented on Twitter, and its latest prediction gives the Conservatives 35% of votes, Labour 30% and the Liberal Democrats 27%.

Tweetminster assumes a uniform national swing and so, like the poll of polls, makes Labour the largest party, but hedges its bets by predicting various hung Parliament scenarios. The organisation is very keen to stress that it's not trying to compete with pollsters, merely trying to work out whether there is any connection between word-of-mouth on social-media sites and election results.

By Wednesday evening there will be more polls to digest, more data from the bookmakers - and perhaps more analysis of Twitter "buzz" from Tweetminster. But of the three groups it's the polling organisations which will be waiting most nervously for the results. They are still generally accepted as the most reliable predictors of the election race - but could the bookies come through on the rails this time?