The two men sitting at a table in a country house hotel in Hertfordshire seemed very relaxed about another confrontation with European regulators over the internet's thorniest issue.

Mind you, if you are the billionaire bosses of a massive moneymaking machine like Google there can't be much that keeps you awake at night. 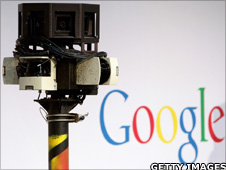 The incident which saw Google Streetview cars scrape data from private wi-fi networks as they roamed across Europe has put the company right in the firing-line of regulators already concerned about its general attitude to users' data.

But Mr Schmidt was clear: "No harm, no foul," was his explanation of why he did not expect the incident to lead to any criminal prosecution.

He insisted that as none of the data had been used or lost, nobody had been harmed by the affair though he accepted there was damage to his company's reputation.

Larry Page went further, claiming there had never been a single case of anyone suffering harm because of data kept on Google logs, while there had been plenty of instances where people had shared too much of their own data online with disastrous consequences.

When I suggested that the privacy issue was something of a crisis for the whole internet industry, Mr Schmidt smiled and indicated that I was indulging in journalistic hyperbole. Then he quickly changed tack: "This is a very serious issue," he said "and we are not in a state of denial."

Larry Page went on to make the point that society as a whole had to start a debate about privacy as we all realised just how much data we were putting online. "It's not going to go away and it's likely to get much more interesting," he said. "Interesting is a euphemism," cut in Eric Schmidt.

To the relief, no doubt, of the two Google bosses, we went on to talk of other things. We asked about the negotiations with News Corp over newspaper paywalls and about Apple's apparent reluctance to allow Google apps onto the iPhone - both Rupert Murdoch and Steve Jobs are perfectly easy to talk to, according to Mr Schmidt.

We heard about the extraordinary technology which is bringing instant translation to many Google products, from subtitles on YouTube videos to a function which allows you to take a picture of a foreign menu on an Android phone and find out that carre d'agneau is rack of lamb.

We tried to ask about Google's plan to launch a smart TV with Intel - and were told to wait until Thursday for more details on that. And we heard about Google's huge cash pile, with Larry Page musing about all the things he could spend it on and Eric Schmidt acting the sensible uncle.

We came away with the impression of a confident company with virtually limitless ambitions advancing on all fronts. The two men make an engaging double act, interrupting and teasing each other, and keeping on answering questions well after our allotted time was up.