Who cares about the Digital Economy Bill?

What's the single biggest political issue for the online community (if there is such a thing) in the run-up to the general election? If you believe the political insiders - those bloggers and tweeters who focus almost entirely on politics - then the crucial issues range from the economy and tax to health and immigration. And of course the really hot policy question is whether Gene Hunt of Ashes to Ashes is a good role model for an aspiring prime minister.

But for others outside the virtual Westminster village, it's all about something that will be debated in the House Of Commons on Tuesday afternoon: the Digital Economy Bill. The bill, with its controversial measures aimed at stamping down on internet piracy and file-sharing, is a cause celebre for the UK's web libertarians. They argue that it will remove the right to a fair trial, stamp out public wi-fi, and effectively wreck Britain's ambitions to be a world web leader.

Those claims might seem a tad overstated, but the bill's opponents have been much more effective in getting their message out online than its supporters in the music and media industries who insist the bill offers a vital and overdue measure of protection against the ravages of intellectual property infringement.

So far, much of the online political class has been completely indifferent to the issue. They appear to assume that complex issues of copyright and connectivity just won't play in Cowdenbeath or Camberley. What's more, most MPs appear unconvinced that there is much to be worried about - until the Liberal Democrats broke ranks last week, the three biggest parties in the Commons were all committed to pushing through the anti-piracy measures in the bill. 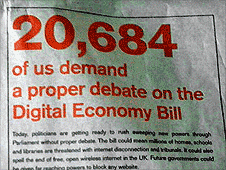 But in recent days, the bill's opponents have done their best to prove to the politicians that they've misread the public mood. Last week an organisation called 38 Degrees launched a web appeal which raised £20,000 in just a couple of days to fund adverts in today's papers warning against the dangers of rushing the bill through without proper scrutiny.

38 Degrees, which is working with the Open Rights Group, also says that 20,000 e-mails have now been sent to MPs by constituents opposed to the bill.

This appears finally to have spurred the Digital Economy Bill's supporters in the media industries into action. The Creative Coalition Campaign, funded by media unions like Bectu and Equity, has placed its own advert in the Guardian, urging MPs to back the bill. A sign, perhaps, that they are no longer quite so convinced of the certainty of victory 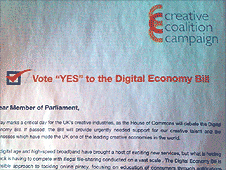 It looks likely that this controversial legislation will get very little time in the Commons, and then go into the "wash-up" process, where the parties agree to push through bills in the final hours of a Parliament. So, for supporters and opponents, there's a huge amount to play for this afternoon. With the backing of both Labour and the Conservatives, the measures look likely to go through - unless MPs decide this really is an issue of widespread concern which needs further examination.

The Open Rights Group and 38 Degrees have worked skilfully to build a web-based movement against the bill - though the real-world demonstration they mounted outside Parliament a couple of weeks ago was not that well attended. The advert they've placed in the papers today claims "most people have major concerns about the bill".

Is that "most people" true - or is most of the population either blissfully ignorant or far more concerned about issues such as tax, the health service and education? The Commons debate will show which way MPs are betting - if they can concentrate amid all the election excitement.