Why did the Digital Economy Bill get debated by just 20 people in the Commons before being rushed into law? Why did politicians take more notice of tabloid headlines about mephedrone than scientific advice? And what rights do householders have to defend themselves if someone breaks in? 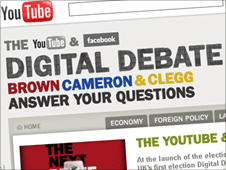 Three issues have that haven't been raised much in the campaign so far, but which were key concerns for the people who submitted questions for the digital debate mounted by YouTube and Facebook, which you can catch up on in video or using the transcripts [73.5Kb PDF].

If a certain event hadn't happened yesterday, this online encounter with Gordon Brown, David Cameron and Nick Clegg might have made bigger news today. All three have recorded video answers to 10 questions submitted by YouTube and Facebook users. There's an interesting contrast in styles with Gordon Brown speaking outdoors but wearing a suit and tie, while both David Cameron and Nick Clegg go tieless.

The questions were chosen in a popular vote and what really excited the online crowd was the Digital Economy Act, with its controversial measures against illegal file-sharers. The question chosen from many on this issue was about the lack of debate - the prime minister appears to concede that the bill was rushed through, saying:

"When we are re-elected, we will make sure that there is proper debate on all these issues to ensure that people's voices are heard."

David Cameron, whose party voted with the government on the bill, says it was rushed through too quickly but defends the measure:

"There were important things in that bill for a really important industry in Britain, which is music and film, and television, radio, and so we thought it was important to let the good bits of that bill through."

But Nick Clegg is scathing about the bill, which his party voted against when it went through in the wash-up process right at the end of the Parliament:

"It wasn't a wash-up; it was a stitch-up. A stitch-up between Labour and Conservative MPs who decided that you didn't deserve to have your representatives in Parliament properly looking at a bill which might have very, very serious impact on the way that you use the internet, the way that you have freedom to work on the internet."

On another issue, the tabloid stories about mephedrone, Mr Clegg again takes a different line from his counterparts. While Gordon Brown and David Cameron are united in their worries about the dangers of the substance and think it was right to act on those concerns, the Liberal Democrat says:

"We're losing the battle on drugs and one of the reasons is because drugs policy has been hijacked by scare-mongering."

On the right to tackle intruders, though, it's David Cameron who has the most arresting line, warning:

"If the burglar crosses your threshold, they leave their human rights at the door."

Nick Clegg takes a more personal line, admitting that if if his wife and children were at risk he couldn't predict how he'd react. Gordon Brown insists that the law is now being interpreted in a fairer way to the householder.

What happens next is an online vote to decide which leader has the best answer to each question. I'm fairly confident that I can predict who will win most votes for their answer on the Digital Economy Act. Last month, online campaigners against the measure warned that its Labour and Conservative supporters would pay an electoral price. Now we'll find out just how many people are really exercised about this issue.