Searching for a hung Parliament?

We've seen how keen the parties, and in particular the Conservatives, have been to place adverts next to Google searches. 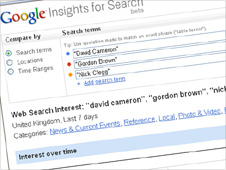 Now the company has published data which should help political campaigners work out what type of searches are particularly hot right now.

The data for the first week of the election campaign shows a big rise in political searches.

The headlines are that David Cameron is narrowly ahead of Gordon Brown - in terms of the number of searches.

But Vince Cable of the Liberal Democrats is more sought out than either George Osborne or Alistair Darling.

And it seems that voters are quite interested in the idea that the election won't provide a clear winner - "hung parliament" queries shot up by 233% to an all-time high, just ahead of searches for Nick Clegg.

Other popular searches were "Chris Grayling", up 525%, and "digital economy bill", which rose by 614% and for a brief moment was a more popular search term than "Afghanistan".

You can do your own analysis of Google search trends on the firm's site.

So plenty of food for thought for party campaigners seeking to place adverts.

The Liberal Democrats, though, with more limited funds than Labour or the Conservatives, may choose not to give their cash to Google. They have found an inventive way to get their election manifesto - or at least a few highlights - to the more tech-savvy voter.

On their website there is an option to build your own video, choosing three policy areas that interest you most, then seeing Nick Clegg talk about them.

They've worked the same trick in a free iPhone app that puts a video on your phone. The Lib Dems have been slower than the other parties in bringing out a smartphone app - but then again their effort does look rather smarter.