If anything illustrates the acceleration of the news cycle in the digital age it's the tale of @bevaniteelllie. Just 24 hours ago Ellie Gellard was an obscure 20-year-old Labour-supporting student, blogger and tweeter (under that @bevaniteellie soubriquet), albeit one who tweeted so frequently that you feared for her thumbs. 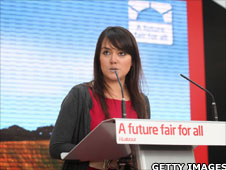 Then she suddenly went quiet for 12 hours - to emerge on the platform as the warm-up act at Labour's manifesto launch. Immediately the blogosphere swung into action, combing through her past online activity in the hope of finding something even vaguely disreputable or embarrassing.

At first it seemed there was little of note, then a Tory blogger struck gold in the form of something written in 2008 by the Stilettoed Socialist as she dubbed herself at that time. The woman who at 20 thought Gordon Brown was the man to lead Britain into a brighter future saw things rather differently at 18, calling on the prime minister to depart the stage for the sake of the party.

Cue predictable Twitter-hurricane, with Tory tweeters rushing to press home their narrative of a spoilt and silly socialist socialite and Labour spinners hitting back with accusations of sexism, ageism and general meanness.

By mid-afternoon online versions of newspapers were carrying stories about Ellie - and a new frenzy of blame and counter-blame was unleashed.

We had the faintly ridiculous spectacle of Labour tweeters attacking a female journalist for writing disparagingly if accurately about a member of her own sex and the even more ridiculous spectacle of other journalists attacking the attackers for daring to be mean to their fellow scribe. In the words of the prophet Michael Winner: "Calm down, dears."

By this morning, when I found @bevaniteellie on the front pages of several newspapers, it already felt like very old news. And did it all matter, had some great issue of political significance been at stake here? No, but it had all been a bit more fun than working out what anybody is really going to do about the deficit.

Labour was proud of its innovative use of technology yesterday, with a shareable cartoon and a manifesto that was designed to be downloaded rather than bought from a newsagent - though the effect was slightly marred by a confusion between megabits and megabytes in the passage about broadband.

But I think the Conservatives will have learned something from Labour's launch. Don't expect to see Dizzy Thinks, Tory Bear or even Tim Montgomerie of ConservativeHome climbing onto the platform to big up David Cameron before he unveils his manifesto.