Never forget: The mic is live

Today started with some people raising doubts about the role new technology was really playing in this election. 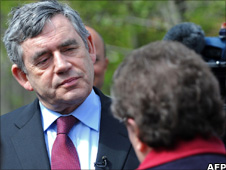 By mid-morning we had experienced what could prove to be the key moment in the campaign - and it was all down to some rather old technology.

Getting back into his car after a difficult encounter with a voter in Rochdale, the prime minister forgot the lesson that all broadcasters learn at their mother's knee - if you're wearing a microphone or even near one, assume that it is live.

He may have assumed that once inside an armour-plated car, the mic was out of range. But it wasn't and the words "she was just a bigoted woman" came through loud and clear.

I'm told that in 1997 Tony Blair's radio microphone was controlled by a technician employed by the Labour Party, who was careful to fade it down as soon as an event or a public encounter was over.

This time the radio-mic was the property of a broadcaster, Sky, which was handling pool coverage for all stations so the party could not control its output.

What's the betting that other politicians are now thinking very carefully about who's in charge of the microphone they are wearing?

Predictably, Twitter has gone bonkers, with the term "bigotgate" swiftly making an appearance.

The news of this huge gaffe was broadcast instantly on the micro-blogging service, political journalist and blogger Paul Waugh had this shortly after midday: "That Rochdalian woman may not be voting Labour once she hears what G Brown said about her...update soon."

Gordon Brown's opponents were swift to make hay. "So this is what Brown really thinks about the voter," said the Conservative chairman Eric Pickles.

The very mischievous right-wing blogger Guido Fawkes had this obviously satirical take: "At this moment Cherie and Tony are on a yacht somewhere sunny, sipping chilled wine and crying with laughter."

You had to look hard to find a positive comment, though a tweeter called @madsyork had this: "I have a lot of respect for Gordon Brown today, actually. I'd be more concerned if he thought every single person was lovely."

We have a perhaps more scientific readout of the effect on Gordon Brown's reputation from a firm called Lexalytics, which tries to analyse sentiment on Twitter. It shows the PM's "sentiment rating" plunging to its most negative level of the campaign in the minutes after the incident occurred. 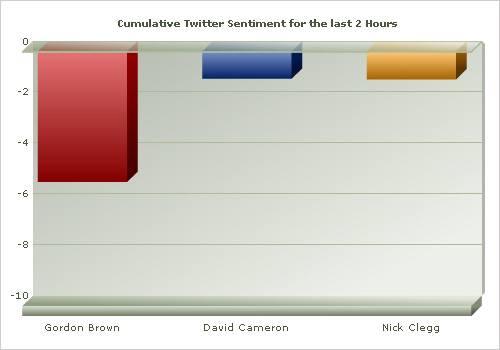 This campaign has been transformed first by the power of television after the first debate, and now by a gaffe created by a piece of technology which Wikipedia tells me was invented in 1949 for use in a performance of "Aladdin on Ice."

One Tweeter suggested that all the politicians should, like Big Brother contestants, now wear microphones 24 hours a day. I know one man who won't be backing that one.