If the volcanic ash from Iceland had made its way across Europe five years ago, its effects would have been even more distressing for the thousands of people stranded far from home. Why? Because five years ago most people did not have access to the social-networking services which are helping some stranded travellers make their way home. 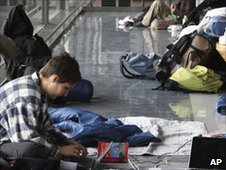 For the last few days, I've been getting messages from friends and acquaintances stuck in various parts of the world. A BBC colleague is marooned in Portugal; a journalist friend is trying to get home from Milan; another is stranded in Helsinki and a software developer is in New York, working out whether he can get home on a container ship. Five years ago they would have been individuals, texting and calling friends at home, but struggling to find others in the same predicament to pool resources.

But now they and many others have turned to the social networks to talk about their frustrations and then in many cases to act together to organise inventive ways of getting home. A Facebook group called Carpool Europe has been set up by the Swedish car-pool movement, and has lots of messages offering or seeking the chance to hitch a ride. The group appears mainly populated by Swedes, but another, called When Volcanoes Erupt, is also acting as a clearing house for travellers trying to get on the move, and there are focused communities like BBC Orkney's Facebook wall; you can listen to the experience of one Radio Orkney listener trapped in Venice at the iPlayer. Other Facebook members are using the service in a less co-ordinated way to seek help from friends. 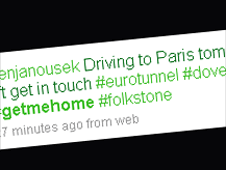 Now, I know how much some of you hate the use of the "T"-word - but there's no getting away from it. Yet again, Twitter is proving the fastest way of starting a movement, or rather two movements. First there's the #getmehome hashtag, then there's #putmeup, which is being used to put stranded travellers in touch with kind souls offering accommodation.

So here are a few of the messages I've spotted:

@hubmum: "Need to get back to UK from Morocco. Anyone else up for organising overland/sea trip back?"
@timlocke73 "Two of us stranded in Berlin. Anyone driving towards England who can offer a lift in the nxt week"
@romebuongiorno: "I am in need of a Paris to Rome or Milano car share"
@damoski "I might be booking a car from Civitavecchia via Pisa/Genova/Milan to Paris on 21/4 afternoon/evening - any sharers?"
@gavinmcgarry: "Any1 want 2 go w/ me by taxi Nice to Barcelona call me now"

There have already been all sorts of inspiring stories. I've followed the progress of the Dragon's Den contributor Duncan Bannatyne, up France and to Calais where he offered lifts via Twitter:

"OK we can take 4 on the 3.40 ferry"
"We have 2 spare seats in car where are you?"
"Tweet me a phone number"
"We are at front of passport control black Mercedes Van"

Meanwhile, historian Dan Snow tried to organise what has been floridly described as a Dunkirk-style rescue of stranded travellers, though that has apparently been halted by officials?. And not everyone was convinced that the likes of Twitter did anything more than cheer them up - the economist Tim Harford, currently making his way across Europe from Helsinki, told me: "Twitter was no help at all, unless it's the thought that counts. Email and internet was vital."

But others have found the social-networking services a useful way to get their message out loud and clear to airlines, car-hire companies and governments about the urgency of sorting out the mess. I've seen one message to a car-hire firm begging them to be reasonable about a £5,000 charge for bringing a car back to Britain - unfortunately the company in question only appears to use its Twitter account every couple of weeks to send out advertising messages, rather than to deal directly with customers.

And, finally, does this message I found on a social network tell us about our changing attitudes to those in power?

"Yes, people helping each other instead of calling the state or companies... it's great! ;)"

Perhaps. But already the politicians are under pressure to do something - send ships, force open Europe's airspace, prop up failing airlines. People have turned to new ways of organising themselves, but they're still looking to the state in a time of crisis.