I don't quite know what came over me yesterday evening - but as I headed home I found myself looking forward to a live television debate between three politicians.

It wasn't so much the cut and thrust of the argument between Alistair Darling, George Osborne and Vince Cable which quickened my interest, but the prospect of the first big social-media event of the election campaign. 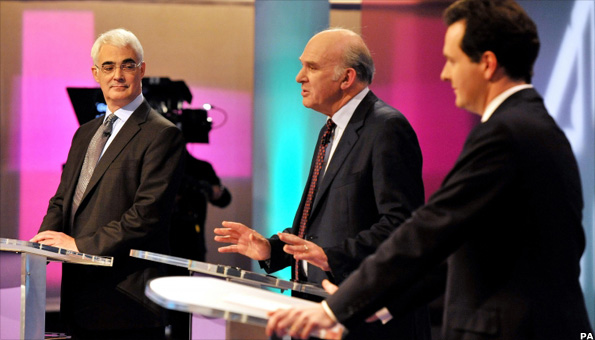 For the last year or so, major television events - from big football matches to reality shows like The Apprentice - have become a lot more interactive because of the social-networking activity that happens around them, mainly on Twitter.

That's started happening with political programmes - from the appearance of the BNP leader Nick Griffin on Question Time to last week's Budget.

But the three prime ministerial debates during the election campaign will bring all this activity up on to a whole new level - and the chancellors' debate was a dress rehearsal for that.

I watched the programme while scanning Twitter and Facebook, and it did add an interesting dimension to the big fight.

Every feint, every parry, every joke (not too many of them), was analysed, applauded or booed by the online crowd. What was immediately apparent was that Twitter, not Facebook, is the arena for this activity.

Facebook is trying to whip up interest in politics through its Democracy UK page, but its page on the debate only attracted a few dozen comments, while there were more than 12,000 tweets during the hour-long debate.

Each candidate had his own claque of virtual cheerleaders determined to call the debate in his favour.

So after a while, the Conservative chairman Eric Pickles tweeted: "George Osborne clearly won the first half hour of the debate."

Vince Cable's fellow Liberal Democrat Susan Kramer chimed in with: "Vince brilliant but amazed that George is most dull!"

And the Foreign Secretary David Miliband added this view from across the Atlantic: "Just arrived canada for 24 hours for g8 foreign mins meeting. Heard Alistair won the economy debate."

But there appeared to be plenty of real people as well as party spinners joining in, and it was the Liberal Democrat candidate who edged it in terms of online approval.

Channel 4 ran its own internet poll during the debate, with Vince Cable getting 36% of the votes, and Alistair Darling and George Osborne tying on 32%.

The guidelines for this encounter were loose enough to allow a measure of real debate between the three men, skilfully moderated by the presenter Krishnan Guru-Murthy.

The rules for the prime ministerial debates are so many and so restrictive that there may be a lot less interaction between Messrs Brown, Cameron and Clegg - and that could make the social-media activity around the debates even more compelling.

Twitter, rather than television, could be the place where the issues are really dissected.

But is any of this important, do the tweets or blog comments or Facebook updates of thousands of voters provide any useful guide to what the electorate as a whole really thinks?

Well, some are betting that it does matter. They believe that careful analysis of this activity can deliver data which could be as useful or accurate as opinion polls.

In the last few weeks, I've been hearing a lot about something called "sentiment analysis", a branch of computer science that attempts to extract meaning from words expressed online - you can read a useful Wikipedia definition here.

The big challenge facing this science is that computers just don't do irony - and when it comes to analysing the sentiments of British voters, that's a problem.

But a number of companies are planning to use the technique to try to look into the minds of the online crowd during the election.

An organisation called Tweetminster, which analyses political activity
on Twitter, is using another term, "predictive modelling" - for an interesting experiment it's planning to undertake.

It will track the online buzz around candidates and constituencies in the forthcoming election and work out whether there is any correlation with the winners.

Alberto Nardelli from Tweetminster says a similar exercise carried out during Japan's general election last year proved accurate in predicting the results of 90% of constituencies.

Well, we shall see. After all, sentiment analysis or predictive modelling of last night's debate might lead you to conclude that the next chancellor will be Vince Cable, but I think you could still get quite good odds on that from the "sentiment analysts" at Ladbrokes or William Hill.