Every time a new technology comes along, it's treated by some as a cause for panic.

The telephone was going to be a threat to families because women would spend too much time talking to friends; television would destroy the health of our children because they would never go outside again; and, of course, video games would encourage violent behaviour.

But in recent years, it's social networking - and in particular Facebook - which has been the focus for concern.

In the last year, Facebook has been accused variously of raising your risk of cancer, encouraging sexual predators - and now of leading to a rise in the incidence of syphilis.

That story appeared first in a front page story in the Sun, headlined "Sex cases soaring due to Facebook romps", and was later picked up in the Daily Telegraph before spreading around the world. 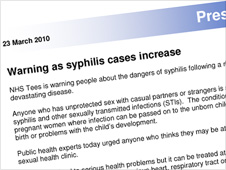 It originated in a press release issued on Tuesday by the NHS in Middlesbrough [62Kb PDF], headlined "Warning as syphilis cases increase".

"There has been a four-fold increase in the number of syphilis cases detected with more young women being affected."

No precise figures are given - it's not clear, for example, over what period this four-fold increase occurred.

But Professor Kelly goes on to say: "Social networking sites are making it easier for people to meet up for casual sex."

He makes no mention of Facebook - but as it is by far the most popular network in Britain, it wasn't perhaps unreasonable for the journalists to make the connection.

This morning, I contacted the professor to seek some clarification; he was in a meeting, but his NHS Tees colleague Edward Kunonga gave me a full run-down.

"There were a number of serious inaccuracies in the newspapers and blogs," he told me. "It was very misleading and exaggerated our position."

In particular, he says, this quote from the Sun is completely inaccurate:

"An NHS trust chief said Facebook and similar sites were to blame for a shocking rise in cases of potentially-lethal syphilis in the region."

Professor Kelly had not named Facebook, nor made the causal connection. 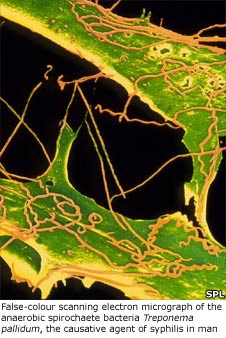 So what are the facts? Apparently, in 2008 in the NHS Tees area (Middlesbrough, Stockton-on-Tees, Redcar and Cleveland) there were fewer than 10 cases of syphilis - so few that, under data-protection rules, the NHS can't give out the exact number.

But in 2009, 30 cases of heterosexual syphilis were notified to the NHS. So, yes: a four-fold increase, but a very small sample from which to drawn any very big conclusions.

So what is the connection with social networks?

Mr Kunonga says that in all these cases there is a thorough examination of the patient's sexual history and connections - and a significant number of people mentioned having casual sex with people encountered through social networks.

The Sun links this to a survey last month suggesting that the region is Britain's Facebook capital - "figures released last month showed that people in Sunderland, Durham and Teesside were 25% more likely to log on regularly."

But Mr Kunonga points out that Sunderland and Durham are not in the NHS Tees area - so the syphilis statistics do not apply to those apparently Facebook-mad cities.

"Our press release was simply trying to highlight the risks of casual sex. We did not make the claim that social networking sites are causing the rise in the incidence of syphilis."

I'm no medical scientist, but it seems pretty clear that what causes syphilis is casual sex, whether arranged via a social network, the telephone, e-mail, or something very old-tech like five pints of cider in the pub on a Friday night. But don't expect any headlines screaming "Cider Gives You Syphilis".