FT to papers: Readers will pay for quality journalism

Can newspapers which have spent years giving away their content free online now start charging for it?

That's the debate which has gripped editors and journalists over recent months, with few feeling too optimistic about getting their readers to pay.

But I've been speaking to the boss of one rather successful online newspaper - and his message is that papers can and should start asking a fair price for news. 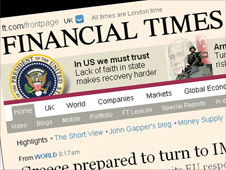 "If they put their mind to it then they can produce compelling products online which people will pay for."

The Financial Times, which is part of the Pearson group, has just unveiled a 43% rise over the last year in the number of people subscribing to its online service.

Mr Grimshaw said the company does not break out the revenues it gets from those subscribers, but as there are now 126,000 of them, paying a minimum of £180 a year, that looks like around £20 million.

The FT has been charging for online content for many years - but in 2007 it adopted its current model which has three elements to it.

Anonymous visitors to the site can just see headlines and read one article per month, those who register but don't pay are allowed 10 articles a month, and then there are the paying customers who get everything, including an iPhone app.

What's interesting is that the middle group, those who register but don't pay, are still proving lucrative. The 1.9 million people registered users have given some very basic information such as their job title.

That's enough, according to Mr Grimshaw, to allow the FT to run a targeted advertising and marketing operation with high yields.

But surely a newspaper with a very specialist and wealthy audience is in a far better position to charge than those with less valuable content?

Rob Grimshaw says newspaper publishers are putting too low a price on their journalism:

"The number of people who can write great quality content day in, day out is really very small - that's why journalism is a profession. For all that's going on in the blogosphere and with user generated content publishers still have a grip on the majority of the best writers in the world."

He admits it won't be easy for papers that have been giving away their content for 10 years to start charging but insists it is feasible. In any case the existing advertising-funded model has been strained to breaking point.

One of the giants of the advertising industry Sir Martin Sorrell told an FT conference this week that consumers were going to have to learn to pay for things online because there was simply not enough advertising available to fund all the content.

Of course there is a way of getting through the paywall at FT.com using Google - but unlike many in the newspaper world Rob Grimshaw isn't going to war with the search giant:

"The choice is in the hands of publishers - we could switch off our content on Google tomorrow. If our content wasn't listed on Google we'd have to find another way to acquire traffic."

He says newspapers need to think about the huge amount of traffic they get from Google and how they can better extract value from it.

So the message from the FT is give your readers quality journalism, get to know them much better, stop worrying about Google - and start charging for your content.

Simple really - but don't forget that it took the Financial Times more than a decade of trial and error to get it right.