On the one hand, you have what many regard as Britain's most influential daily newspaper; on the other, a social network with more than 400 million members and global reach. The Daily Mail and Facebook are at war, with new media accused of failing to protect children - and old media in the dock for shoddy journalism. 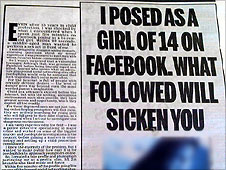 The Mail has never been a great fan - "How using Facebook could raise your risk of cancer" was one headline last year - but it was an article on Wednesday that brought relations to a new low. The network has been having a terrible week in PR terms, following a high-profile murder case with a Facebook connection and its refusal to put the Child Exploitation and Online Protection panic button on its site.

The Mail's coverage of this story featured a front-page report, an editorial and a big spread which included an article by a child-protection expert Mark Williams-Thomas. The opening paragraph read:

"Even after 15 years in child protection, I was shocked by what I encountered when I spent just five minutes on Facebook posing as a 14-year-old girl. Within 90 seconds, a middle-aged man wanted to perform a sex act in front of me."

He went on to describe how a series of men approached him and made sexual suggestions, painting a chilling picture of the dangers for teenagers using Facebook.

It has to be said the story never sounded very convincing - unlike some other networks or instant messaging services, Facebook is actually place where it's rather difficult to conduct random chats. If you were to set up a profile and just wait for "friends" to arrive, you would be likely to have to wait for days, not minutes. What's more, the company says that its privacy settings mean that a 14-year-old girl could not receive a message from someone unless they were a friend or at least shared a school network. 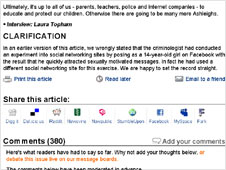 Facebook says when it contacted Mark Williams-Thomas, he had a rather different story. He had been contacted by the Mail which had provided him with the material about the fake profile, but he had corrected it to make it clear that it involved not Facebook but another social network. By late yesterday, the story on the Mail's website had been amended; although it still featured a Facebook picture, it included this apology:

"In an earlier version of this article, we wrongly stated that the criminologist had conducted an experiment into social networking sites by posing as a 14-year-old girl on Facebook with the result that he quickly attracted sexually motivated messages. In fact he had used a different social networking site for this exercise. We are happy to set the record straight."

I contacted Mr Williams-Thomas to check a few facts, and he confirmed that the story had indeed been "ghosted" by a Mail reporter. He says he got back to the paper with a number of changes before publication, but although they acknowledged receipt of his alterations, they were not acted on. 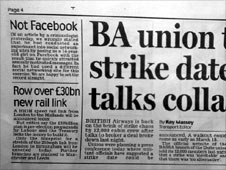 This morning the newspaper carried a apology on page 4, quite a rare occurrence for the Daily Mail. So does the matter end there? I've seen a very strongly-worded letter from Facebook's lawyers saying their clients are considering what further action to take in relation to the "false and defamatory statements in the article".

Somehow, though, I get the feeling that after a week of battling Ceop, ministers, and the media over its child protection policy, Facebook may decide that it does not really want to go to war with the Daily Mail.

Update, 1044 12 March: Well, it seems I might be wrong: Facebook is not stepping back in its battle with the Daily Mail. Last night the company challenged the paper to name the social network used in the experiment:

"We should all be concerned that their refusal to name the network they did use for the experiment is not helping to expose the real places where people are vulnerable online. We are in discussions with them and have not ruled out legal action."

I've just spoken to the child-protection expert Mark Williams-Thomas, who conducted the experiment, and he says he did not tell the Mail which network was involved, though he made it clear it wasn't Facebook.

So why wouldn't he identify it? "It would be irresponsible to name the network," he told me. "It would generate the wrong kind of traffic to the site - and could endanger attempts to improve its security." Mr Williams-Thomas went on to tell me that he thought Facebook's security, while not perfect, is among the best of the social networking sites in this regard.