Last September, as debate raged about the government's plans to crack down on illegal file-sharing - and the extent to which they might have been influenced by lobbying - the BBC put in a freedom-of-information request to the Department for Business. We requested information about any correspondence relating to online piracy or illegal file-sharing.

Now, after a long wait, we've been supplied with a stack of letters to and from Lord Mandelson and other ministers relating to this issue. Those looking for a smoking gun - perhaps a despatch from a Hollywood tycoon warning "Cut 'em off or else!" - may be disappointed.

But the letters do show a sustained campaign of lobbying in favour of the Digital Economy Bill by music-industry trade bodies - and by opponents trying to persuade Lord Mandelson that some of its measures will be damaging to civil liberties, as well as being costly and ineffective.

I have gone through the correspondence to provide edited highlights - and you can look at the documents themselves by clicking on the links at the bottom of this post. Readers may of course wish to "crowdsource" a search for some unnoticed gem.

The first letter is in July, after the publication of the Digital Britain report, but before Lord Mandelson decided to toughen up the measures against illegal file-sharers. The trade body Respect For Film is obviously impatient for the report to be acted on: Lavinia Carey of the British Video Association writes:

But a few weeks later, Lord Mandelson announced that the bill was going to be toughened up, bringing in those technical measures which could see repeat offenders disconnected temporarily from the internet for illegal file-sharing. 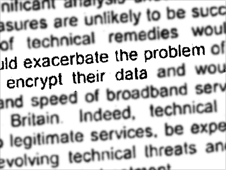 In August, the internet service provider Orange warned that the measures would be "expensive to implement and operate", were unlikely to be successful, and could have unintended consequences. The ISP said that the threat of disconnection "could exacerbate the problem of copyright infringement by encouraging users to encrypt their data."

In late September, U2's manager, Paul McGuinness, wrote to the business secretary welcoming the tougher stance, and warning that it was crucial the measures were implemented as soon as possible.

Other trade bodies weighed in with their support. The music-licensing body PPL told Lord Mandelson, "It is time we had an online world more akin to the High Street than the wild West."

The Music Publishers Association said a significant reduction in unlicensed file-sharing was a "critical goal for the UK music industry" which played an enormous role in the country's economy and culture.

Feargal Sharkey of UK Music said online piracy was "shaking the economic foundations on which the entire music industry depends," and attached statements of support from musicians including Lily Allen, Gary Barlow, Mika, and Mark Ronson. Alesha Dixon, saying she was joining her fellow musicians to condemn illegal file-sharing, wrote: "I feel it is no different to theft".

The documents released by the Department for Business also include many letters from constituents protesting about the bill, passed on to Lord Mandelson by MPs. One letter has a note from MP Clare Short in which she confesses "I am afraid I do not really understand the complaint but I would be grateful for your response."

But did the office of the Isle of Wight MP Andrew Turner merely cut and paste from a constituent's angry denunciation of the bill? A letter from the MP to the business secretary, passing on the constituent's correspondence, starts "Dear Mr Mandelson", but is then headed "Ramifications of Mr Mandelweasel's 3 strikes and disconnect policy".