Are the political parties now too impoverished - or just too bone idle - to do the basic work of research and campaigning by themselves? Or do they really believe in the wisdom of crowds?  I ask because both Labour and the Conservatives appear to have caught the crowdsourcing bug.

Last week the Tories appealed to the internet for help in framing their response to the Budget, and now Labour wants web users to design its campaign posters. So how is that going? 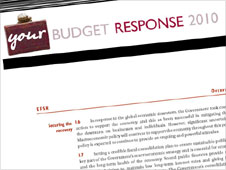 "Going well", was the verdict of Conservative Party chairman Eric Pickles on its crowdsourcing effort - or at least that's what he was saying on Twitter just an hour or so after the Budget response site  went live. I asked him how many responses had been received - and he replied:

"Hi Rory, I'm not in the office at the moment but the team tell me they're coming in thick and fast."

Now the Conservatives were always clear that this was not about creating yet another forum for debate about the Budget, but a way of unleashing a citizens' army of researchers who might spot the "devil in the detail" and hand over the ammunition to the hard-pressed Tory Treasury team.  So, on Friday afternoon I inquired again of the Conservatives - what exactly had been delivered to George Osborne and his team that they had not spotted themselves?

A spokeswoman came back with a rather vague reply. Yes there  had been "hundreds of really good comments", though they appeared to fall more into the category of opinion rather than fresh analysis. She could not give me any example of a detail spotted by the web crowd that had eluded the party's Treasury team, but promised that some of the comments would be published this week.

So it looks as though the "crowdsourcing" of online economic expertise has morphed into just another web forum.

And what of Labour's plan to save on its advertising budget by getting its supporters to design some posters? It's promising that next weekend digital poster boards in London and Manchester will carry a poster designed by one of its online supporters - "the first time a political party, certainly in the UK has done this."

Well I think the Liberal Democrats might contest that - they've had a campaign running for a while on their ACT social networking site, inviting activists to "design a poster promoting the core Lib Dem value of 'Fairness'". They already have a number of entries up on the site, and appear to be making their "crowdsourcing" more of a public affair than either the Conservatives or Labour.

Labour's press release about its poster competition quotes Robert Senior, the head of the party's own advertising agency, Saatchi & Saatchi, as saying,"The world of one-way communications is a bygone era. We prefer to invite our audiences to participate in the ideas and play an active part in this election."

And by the way is it just a coincidence that this initiative was unveiled on the day that the Conservatives' ad agency, M&C Saatchi, launched their latest poster? Perhaps the advertising war between Labour and the Conservatives is also turning into a continuation of an ancient advertising industry feud.

But I wonder if Mr Senior is really convinced that online amateurs can do as good a job as his highly professional - and highly-paid - copywriters and artists?

Examples such as "mydavidcameron" have shown that the online community can be pretty inventive when it comes to disrupting the traditional campaign poster.

But we've yet to see the evidence that the amateurs can do as good a job as either professional political researchers or advertising executives. So expect plenty more "crowdsourcing" initiatives, but I think the parties will still be spending as much as they can afford on professional campaigning.