A little bit of politics

Now, this may come as a bit of a shock but over the next couple of months this blog is going to contain, in the words of a 1980s comedian, "a little bit of politics". 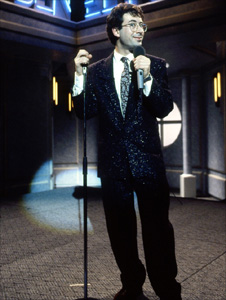 I'm taking up a temporary position as the BBC's digital election correspondent, with the job of examining how politicians and voters are using new technology in the run-up to the general election. I will still keep an eye on the rest of the technology landscape, but the blog will gradually become infused with the political scene.

"Digital election correspondent?" I hear you ask. "What's that when it's at home?" Indeed, there have been hours of debate about the title. Focus groups were convened, consultants consulted, and marketing experts commissioned - at some expense - before we zeroed in on that nomenclature. I'm joking, of course - we umm-ed and aah-ed a bit, but nobody came up with anything better to describe the job.

So is it going to be a "digital election"? Will the methods which helped Barack Obama into the White House arrive here and transform British political campaigning? Will it be a Twitter or Facebook election, and will candidates abandon old-fashioned practices like knocking on doors in favour of sending the voters a YouTube video? Even before the campaign has started, there have been dozens of debates about this subject - and scepticism seems to be mounting.

There are doubts about just how big a role social media played in the Obama campaign - good old-fashioned e-mail seems to have been the key weapon - and about whether methods which work in the United State where voters and money coalesce around invidual politicians rather than parties can translate to the UK. At an event last week, my colleague Nick Robinson described much of the conversation about new media as "self-important narcissistic tosh". He has a point - obsessive conversations on Twitter between political groupies seem likely to pass much of the electorate by. 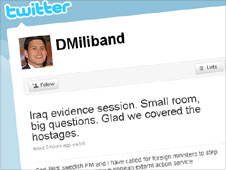 Nevertheless, I do think that new technology will mean this election will be very different from the previous one - and there will be plenty for me to get my teeth into. In 2005, Facebook, YouTube, Twitter, and smartphone apps either did not exist or had yet to have much effect; this time, the parties and the voters will all be working out how to use them to their advantage. The effect of technology will be felt in two areas: the organisation of the campaign and the acceleration of the news cycle.

Plenty of resources are already going into using new-media methods to organise campaigns, though that doesn't mean the old methods will fall by the wayside. "We'll still be knocking on doors," one senior party official told me, "it's just that we'll be organising the knocking-on-doors via Facebook".

The parties are convinced that using social media can help them to mobilise supporters who need just a little nudge to contribute a bit more effort.

One example: the Conservatives and Labour are building their own social networks that enable telephone canvassing to be done from their own homes by members with the results fed into a central database. The idea is that political activity becomes just as easy as creating a group on Facebook, or updating your Twitter status. 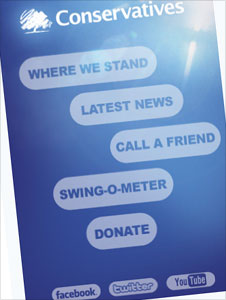 Mobile phones look certain to replace clipboards as the tools used to record canvas results. So far, two parties - the Conservatives and UKIP - have released iPhone applications, with others promising to follow. The Conservative app allows users to ring all the numbers in their phone's contacts list and ask them which way they will vote.

But we're also seeing how web-savvy politicos can quickly disrupt their opponents' campaigns. Labour launched a website to promote its election slogan A Future Fair for All - but omitted to buy up the .org domain, so futurefairforall.org is now inevitably being used by an unnamed group to undermine the party's message. And is it worth any party spending money on poster campaigns when, as with "mydavidcameron", they can quickly be subverted by online pranksters?

Social networking is also helping to accelerate the news cycle - so this time a Prescott punch or a Jennifer's ear will be old news within hours. There was a good example of this a couple of weeks ago when the BBC reported that staff at Downing Street had contacted a charity called the National Bullying Helpline. Within minutes of the story breaking on a Sunday afternoon, various bloggers and Twitterers were deconstructing it, asking whether the charity had breached confidentiality and then uncovering its links to a business which advises on bullying.

Politicians are using new-media tools to try to wrest control of stories from the media. But this makes it all the harder to keep internal tensions under wraps. At the weekend an influential Conservative blogger Tim Montgomerie called for a return to "red meat Toryism". His thoughts and the comments they inspired may have made uncomfortable reading for David Cameron. Similarly, a post about the way candidates are selected on the Labour blog Labour List shone a light on tensions within the party.

Some will doubtless use the technology to create a digital Westminster village of as little relevance to the electorate as the old one, and there will surely be plenty of storms in micro-blogging teacups receiving extensive coverage across the political web. But there is also the possibility for voters to grab the steering wheel and use new media tools to take the campaign off in a new direction. Now that would be exciting.

Still, while it may not be a Twitter election, the micro-blogging service will be a useful place to monitor all things political. So I've set up an account called @BBCRoryCJ which you can follow for news about politics - and technology.