A message arrived the other day asking:

"can u give me a crash course in citizen reporting? What tech is best and are there rules/tips?" 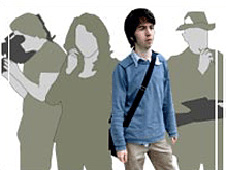 I promised to think about this and get back - but soon realised that I had a problem. After all, I'm not a citizen reporter, but a professional journalist - you may of course disagree - with all the resources of the world's biggest news organisation at his beck and call.

Still, I do see it as my job to experiment with new tools, and it's clear to me that for a very small outlay, the citizen reporter can now equip him or herself to do quite a professional job.

What will be harder is to acquire all the different skills of a multimedia journalist - and, most important of all, to promote your work and to get an audience. So here are my first thoughts:

For absolutely nothing you can get yourself a blog, which is easy to customise, and can act as a central point for all your journalism. I've tried both WordPress and Blogger; each makes it simple to share your thoughts - and your photos and video content - with the world.

And now the web is going mobile, it's becoming easier to post to these blogs from anywhere, using a phone rather than a computer.

This may be the area where you have to spend most - while you can snap away with a mobile phone, decent photographs still require a digital single-lens-reflex camera. But once you've taken your pictures, getting them online and distributing them is free.

Sites like Flickr or Picasa make it very easy to share your photographs or simply store them before using them in a post. You can also get a memory card with wi-fi built in, enabling you to upload photos without a computer.

Video journalism can still be quite expensive if you use high-end cameras and have ambitions to make a polished product, but there are now all sorts of tools that allow citizen reporters to turn out something rough and ready for virtually nothing.

Small solid-state video cameras costing around £100 are one option - plug them into the USB port of a laptop, use some free editing software, and very swiftly you can upload to YouTube, Blip TV, Vimeo or another video-sharing service.

But it's smartphones which are now transforming "instant" video. The latest models will all produce acceptable pictures - and, more importantly, will allow you to edit and upload your pictures to the web with a few clicks.

You can go live for free using mobile applications like Ustream, Bambuser or Qik - though I'm still waiting for the first real breaking-news story to arrive via one of these services.

Strangely, it used to be harder to record, broadcast and promote quality audio than to do the same with video. Now there's an explosion of new tools, and again many are based on smartphones.

So you can either simply record audio on your phone using the surprisingly high-quality microphones that are in many modern handsets, or you can plug in an external microphone.

Audioboo is one way of getting a quick one-take radio report out of your phone and on to the web. There are also lots of phone apps which allow you to edit audio without having to transfer it to a computer, though I still find editing on a phone very fiddly.

Then you can use tools like Soundcloud or Mixcloud to upload a finished report to the web.

None of this will be of any use if you can't tell people about your journalism, but social networking has made that easier.

Facebook has the biggest audience - over 400 million worldwide now - and it's easy enough to upload links to your blog, or some audio or video to your Facebook page.

But that may not reach people beyond your immediate friends and although some of you may wince to hear this, I really believe that Twitter is becoming an essential tool for all journalists, amateur or professional.

That's because its users are there for less social reasons than Facebookers. They're looking for useful information and if you post a link to your story about some breaking news, you've a fair chance that it will be read - and hopefully re-tweeted by other users. If you add a hashtag linking your story to some trending topic, so much the better.

And as you immerse yourself in Twitter - or other social networks - you will find you get back both stories and contact with your readers. Like the person who sent me the message which inspired this post.

In summary, a smartphone and a social network are the only two essential tools for a citizen reporter. But, as I said above, what do I know? I consulted an expert, Josh Halliday. He's a student journalist who runs a local news site in Sunderland, and has also tried out in earnest a lot of the tools that I've only played with. Here's what he told me:

"Dropbox is a great app for sending photos to a specific predetermined place in next to no time. I've used it for in-app photo taking, then wiring back to someone on an internet-connected computer to upload/edit. It's faster but more restrictive than e-mail as you can only send to someone with the same Dropbox account.

"The iTalk app surpasses any dictaphone I've ever bought (and I've bought a few). The catch is, it is just a dictaphone and can't upload files of any meaningful size. I use it solely as a dictaphone, for audio that I'm only transcribing rather than broadcasting.

"I use Audioboo for broadcasting interviews 'from the field'. Recording in great quality and embeddable into any HTML page, my only qualm is the shaky uploads.

"I use the Notes iPhone app for drafting out a report before copy/pasting into Wordpress and publishing, saving battery life. Notes were my saviour when reporting from the Amsterdam football tournament for a series of SAFC blogs. I finessed my prose offline before tentatively connecting to the web to file my report, saving me a fair bit of money.

"I'd also recommend MiFi (a mobile broadband device) as an invaluable citizen reporting tool, should the reporting be internet-dependent and event-based. Though I've not used it myself, I've heard how it was a life-saver when multiple people were uploading video/audio/images on the move."

So a few tips from both Josh and me on citizen reporting. What neither of us have come up with is any rules - the other part of my Twitter correspondent's request. Perhaps that's because in a fast-changing web world, and with the exception of certain basic standards of honesty and clarity, today's rule will be disproved by tomorrow's events.