Microsoft catches up in the smartphone race

It was a packed news conference with desperate journalists clamouring to get in and hear Steve talking about a revolution in mobile connectivity.

No, I'm not talking about Apple's iPad event in San Francisco last month, but the Microsoft event in Barcelona; the man with the plan for your mobile future was not Steve Jobs but Steve Ballmer. 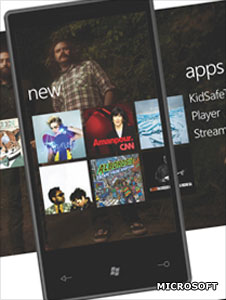 And Microsoft wasn't launching a new device - but yet another version of the Windows mobile operating system. This time, though, it's re-branded as "Windows Phone 7 Series"; Microsoft says it's "designed for life in motion" and will be both "delightful" and "fun".

So will this put Microsoft back in the smartphone game, where despite a whole series of shiny new operating systems dating right back to Pocket PC in 2000, it's failed to make much headway? The company has been going backwards over the last couple of years as Apple and Android have stolen the limelight.

Mr Ballmer left it to his younger cooler mobile vice-president Joe Belfiore to wow the crowd with all the features of the new system. He started unpromisingly: "We wanted to build a phone with the end user in mind..." Not exactly a radical approach - as a colleague put it, that's probably what Alexander Graham Bell said.

But what appeared on-screen looked clean, easy to use and attractive. The new operating system has at its heart the three must-have features of the modern mobile world - search, social, and location.

So there's a Bing button (I'm not clear whether you can customise that as a Google button) which gets you searching immediately. There's a People Hub, where you can see all your friends and their various social-networking activities. And location is built into a lot of the features, so that you can see local news, spot local services, and generally enjoy a localised web experience.

So far, so good - but also nothing that isn't being offered by the likes of Apple, Android and other state-of-the-art mobile OSes. What Microsoft is hoping is that two of its big brands - Xbox and Zune - will be the key to luring users back to a Windows phone.

Keen Xbox Live players - and there are plenty of them - will be able to play simple games on their mobiles, and every Windows Phone will from now on also be a Zune player, able to play music and video.

So Microsoft and its partners should now be able to build phones that can do everything the iPhone does in the same integrated way, while tapping into the still much larger population of Windows desktop users. But here's the hitch - there will be no devices on the market until late this year, in time for Christmas.

Over the rest of this year, the makers of other smartphone operating systems will not be hanging about twiddling their thumbs. Apps are becoming ever more important for phone users, and developers are now being invited to make applications for all manner of handsets - from the iPhone to new devices launched by Nokia and Intel under their new open-source MeeGo platform. Will they be devoting a lot of time to building for Windows Phone 7 when there will be quicker ways to reach an audience?

Microsoft has caught up with its smartphone rivals - but in nine months' time, those rivals may have sprinted off into the distance again.