HTC: Out of the shadows

Five years ago you probably hadn't heard of them - even if you were using one of their phones. Even today, HTC isn't among the better-known names in mobile. But the Taiwanese firm is working hard and spending lots of money to make sure you know its name - and its main weapon is Google Android. 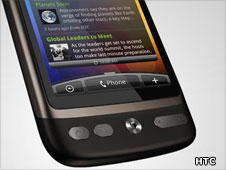 At the Mobile World Congress on Tuesday, HTC launched two eye-catching phones on the Android platform - the Legend and the Desire. On top of Android, they both feature HTC Sense - the company's own software which blends your contacts book, e-mail and social networking activity into a seamless whole. It's an idea which the company claimed it originated but is now being followed by just about everybody else - just look at the new Windows "People Hub".

While plenty of other manufacturers are now bringing out Android phones, HTC has really set the standard. Of course last month Google unveiled its very own Android phone, the Nexus One. But who made it? HTC of course, and its logo was still visible on the phone, with its CEO on stage at the launch.

How different from just a few years ago, when the Taiwanese firm made "white label" phones for operators (remember 02's XDA?). Then in 2007 it started coming out of the shadows with the touchscreen HTC Touch, an early iPhone challenger.

It has long been associated with Windows mobile phones and indeed launched a new model here - though for Windows Mobile 6.5 rather than the new Windows Phone Series 7 operating system.

But you get the feeling that Android is where its heart is and where its most advanced design effort is now being concentrated. HTC tells me its staff spent months at Google's Mountain View headquarters helping in the run-up to the operating system's launch in 2008, calling home to tell colleagues just how good all the free food was.

So are Google and HTC in perfect harmony? Not quite. HTC seemed eager to stress in Barcelona that its new Androids will have even more to offer consumers and perhaps be cheaper and more widely available than Google's Nexus One.

Maybe Google won't mind too much - after all the success of the Android platform is more important to the search giant than just the sales of its own-brand phone. But HTC, having finally emerged from the shadows, is determined to make sure its brand isn't obscured by Google's.

The company executive I met showed me an internal video, aimed at motivating staff. It was full of stirring images of figures like Nelson Mandela and Mother Theresa, with the slogan "Quietly brilliant" repeated time and again.

But HTC seems determined that its days as the quiet one of the mobile market are over.