Getting smart at Mobile World

BARCELONA: Thinking of a trip to Barcelona this week? Don't bother. Flights and hotel rooms are either unavailable or will cost a king's ransom and the city is throbbing with irritable types shouting into three phones at once. For this is the week when the mobile phone industry comes to pay homage to Catalonia - or rather to try to do as many deals and exchange as much gossip as possible between beers and tapas at Mobile World Congress. 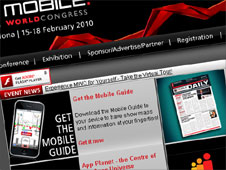 The mood this year should be grim after a 2009 that this industry like many others will want to forget - mobile handset sales fell for the first time most in the mobile world can remember. But for what you might call the 'smart set' it wasn't such a bad year. Smartphone sales raced ahead, with the retail analysts Gfk calculating that sales in Western Europe rose a staggering 109% in the last three months of 2009 compared to the same period in 2008.

So that's where the growth and the profits are and it's the question of which handsets and which operating systems are going to rampage across this smartphone battleground in 2010, consigning their opponents to oblivion, which is exciting visitors to Barcelona this week.

What's the state of the smartphone market then as this event gets under way? If you were to believe one Sunday newspaper, Apple rules the roost - Nokia "has been plunged into crisis by the arrival of the iPhone and iPad" read a headline. Well, it's true that the iPhone changed the rules of the game but the figures don't yet add up to a crisis for Nokia, even though it was caught on the hop by the arrival of first touchscreen then apps.

The research firm CCS has sent me their report on the market for 2009. It shows smartphones running Symbian - formerly owned by Nokia, now open source - still have 46% of the market, though that's down from 64% in 2007. In second place comes Blackberry with 20%, followed by Apple with 14%, with Google's Android moving forward to take 4% of the market. So Apple's advance has been quite remarkable - but it's got some way to go before it really makes Nokia suffer.

Actually I've left out one player which has repeatedly tried and failed to move its desktop muscle into the mobile world - Microsoft. Its Windows Mobile operating system had just 11% of the market last year, so if anyone has been plunged into crisis by the arrival of the iPhone, it's Microsoft's mobile division.

That makes this afternoon's news conference at which the firm's CEO Steve Ballmer will apparently unveil a completely new approach to its mobile strategy all the more interesting. Everyone is expecting Windows Mobile 7 - and many journalists are stifling yawns - but Microsoft PR people are hinting that they really have got something interesting up their sleeves.

Apart from that, one of the more interesting events should be Tuesday's launch of new HTC handsets. The Taiwanese firm used to be an obscure maker of "white-label" handsets for operators - but three years ago began to push its own brand with increasing vigour. It's also the maker of Google's Nexus One - but is already hinting that it will have something better than that which also uses Google's Android operating system.

Like Apple, Google has no stand here but is a big looming presence. And this year the company's CEO Eric Schmidt is giving the Mobile World Congress keynote speech late on Tuesday, and may face some interesting questions: How's the China crisis working out? Was the Buzz launch really such a great way to convince the world you valued the privacy of their data - and how amused are you by the fact that HTC seems determined to steal the Nexus One's thunder?

And as I finish writing, news is coming through that 24 mobile operators, including many of the biggest names, have allied with the handset makers LG, Samsung and Sony Ericsson to create what they call the Wholesale Applications Community. Their idea, they say, is to cut through the complexity of the mobile apps world so that developers can be free to make apps that will work on just about any phone.

In other words, they don't like the way Apple and its iPhone completely dominate the apps ecosystem. So yet again a company which doesn't turn up at Mobile World Congress is making its presence felt in Barcelona.

Update 09:50:This was supposed to be a quiet Mobile World Congress with some major absentees and not a lot of news breaking. Instead the first morning has already brought a couple of eye-catching developments.

While most of us have been concentrating on high-end phones and ultra fast networks Vodafone's big announcement was pointed in the other direction. The mobile operator is unveiling two phones aimed at developing countries. One will sell at $15 or less, the other at $20 or less, and Vodafone says the phones will be launched first in India, Turkey and in eight African countries. The phones - with a tiny screen and hardly any features - may look unsophisticated to smartphone users, but the aim is to get them to people deep in the countryside where there's a big unmet need for mobile connectivity.

Then there was Adobe making clear that it wasn't going to be intimidated by Apple, which has said some unkind things recently about its Flash video platform. Adobe is now making clear its ambitions to bring Flash to a wide range of mobiles, even if Apple has shunned it on both the iPhone and the iPad. And by teaming up with 70 developers in what it's calling the Open Screen Project the software firm is part of a growing challenge to Apple's more locked-down vision of our mobile future.