A digital time capsule at the library

We hear plenty of warnings these days about the permanence of the web.

Don't put those embarrassing pictures on Facebook because they will be there forever more.

But the British Library has another fear - that old websites will simply disappear into a digital black hole when their owners take them down.

The library says all sorts of material, which may look trivial today, could be of vital interest to future historians. 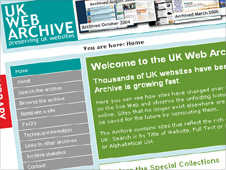 To that end, it's been working for some years on a web archive of British sites, which is now open to the public.

So what's in it? It includes material on the credit crunch, such as the sites of defunct retailers like Woolworths and Zavvi.

There is the website documenting Anthony Gormley's Trafalgar Square fourth-plinth project, which will go offline later this year.

There is material from web forums where people discussed the 2005 terrorist attacks on London, and there's a new project to document the sites of MPs who will retire from Parliament - willingly or otherwise - after this year's general election.

In all, the archive now contains around 6,000 sites, but that's out of around 8 million on the UK domain. The British Library says that it's painstaking work because it feels obliged by copyright law to get the permission of each site's owner before adding it to the archive.

That's not a nicety a big web firm like Google has to worry about, but the Library says it benefits from copyright, which means it gets copies of every book published in the UK, so it has to be punctilious about sticking to the letter of the law.

Now, though, it's hoping that a review of the regulations about the kind of material libraries can collect will mean it's free simply to sweep up anything it fancies from UK's freely-available websites and lay it out in its digital display cabinets.

A couple of questions. Why should a library be so interested in this ephemeral material? And aren't there other ways of accessing this material like Google's cache and the "Wayback Machine" run by the non-profit Internet Archive organisation?

The Library accepts there are alternatives but thinks its curated collection will prove of value to researchers and historians. It's also stressing its permanence: "Big web firms come and go," a spokesman told me. "We'll still be here in 100 years, will Google?"

And this isn't the first time that the British Library has concerned itself with material that might be considered trivial and ephemeral.

Who's interested, for instance, in that free newspaper you left on the train, or the pamphlet thrust into your hand by some campaigner?

Well when the freesheet is from the 19th Century, and the pamphlet is a tract secretly distributed during the English Civil War, then both have proved of great interest to historians combing the British Library's collection.

The average life of a web page these days is apparently somewhere between 44 and 77 days. A lot of the web simply disappears into the ether, but this and other archives are doing a valuable job of preserving some traces of our digital lives in a time capsule.