Has China helped Google in the browser wars?

Google's move to confront the Chinese government over the censorship of its search results is looking shrewder by the day. It has succeeded in mending some of the damage to its reputation caused by its original entry into China, it's given a huge boost to the morale of thousands of Google staff who were never happy defending that decision, and it's moved the spotlight onto its rivals' China policies. 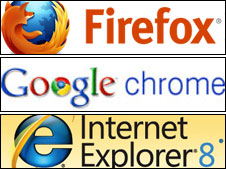 But it could also prove a decisive moment for the fortunes of its Chrome browser. Miocrosoft has admitted that there is a vulnerability in its Internet Explorer browser, which was apparently used by the Chinese hackers who launched an assault on Google and other companies. The German and French governments have both responded by advising their citizens to avoid Internet Explorer.

This terrible piece of PR for Microsoft comes just as the IE browser which had almost total control of the market starts to come under pressure - not just from the open-source Mozilla Firefox, but from Google's Chrome.

Finding accurate statistics for market share in the browser market is quite a challenge - this link appears to show that Internet Explorer, in its various guises, has now been overtaken by Firefox, and that Chrome has come from nowhere to grab 10% of the market.

Whereas this graph shows that while Microsoft's browsers are being hotly pursued by Firefox they still have an overall lead. I'm also told by another reasonably reliable source that in the UK, Internet Explorer has around 75% of the market, with the latest version IE8 now on over 40% of computers.

But what could be a bigger incentive for all those millions of Internet Explorer users to move than hearing that they are using a piece of software that puts them at risk of invasion by Chinese hackers? Little wonder then that Microsoft was on the phone this morning, asking to come and give their side of the story to BBC viewers.

Cliff Evans, head of security at Microsoft UK, arrived at our offices with quite a simple message. Yes, there was a vulnerability in Internet Explorer but it had only actually been exploited in IE6 - so users should upgrade to IE8, which was much safer. And he went further - Internet Explorer 8 was the safest browser on the market and would give you the kind of security against malware and phishing attacks that Firefox and Chrome simply couldn't offer.

I called Google in an attempt to start a bit of a fight over that claim, but my contact was, perhaps sensibly, unwilling to wade in: "We think people should simply upgrade to the latest version of whichever browser they use," he said, though he did add:"Having 14% of the market using IE6 is not good for security."

And Microsoft would probably agree with that. But the millions of people who browse from their desks in big corporations probably don't have a choice - either of their browser or of which version they use. Just as they used to say "nobody got fired for buying IBM" it's my impression that in corporate IT departments nobody got fired for installing Internet Explorer - and then telling users impatient to upgrade to the latest version that "it's not been approved yet".

After enjoying unchallenged supremacy in the browser market for years, Microsoft was finally forced to start innovating when Firefox showed there was a better way to browse. So far it's been usability that's won users to the likes of Firefox and Chrome - now security will become a priority. So maybe those Chinese hackers have done Google a favour...